The troops of the 1st Infantry Division, in country since June, 1917, were veterans of the Battles of Cantigny, Soissons, and Saint-Mihiel. When they pressed the attack four days later, they fought for eight days to reach the other side of Fléville, two kilometers northwest of Exermont.

Meanwhile, the battle-weary 35th filed back to Cheppy. From there, they marched south then east, to Vavincourt, where they rested from October 6 to 11. 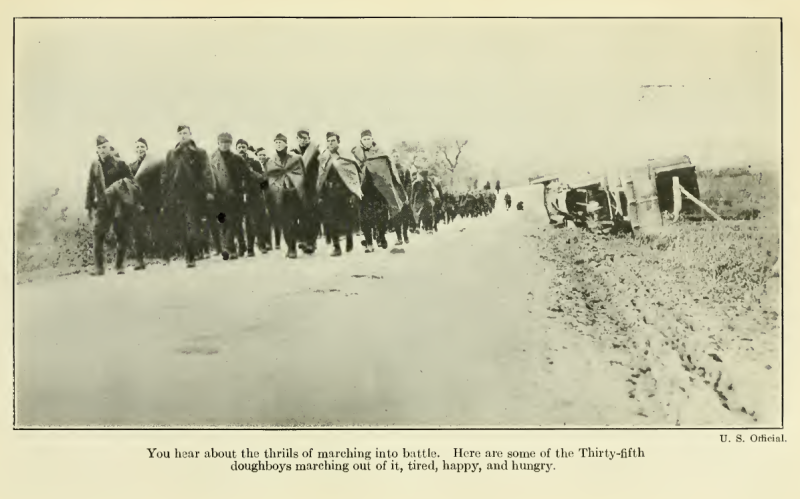 “The days [at Vavincourt] were not without their drills, their policing, and all that is a part of the camp routine. The soldier had heard much of the rest camps, where men wined and dined after they had suffered heavy fighting.

“The rest camp, it was found, was another army chimera. Reveille, retreat, drill, and a repetition of all those things they had done over and over again for nearly a year and a half, was what greeted them daily. Vin rouge and bad beer they had, if that would be called wining; bully-beef and beans they had, if that could be called dining. The rest camp made the soldier long for the battle.” (Hoyt 123)

Rested and reequipped, the 35th marched again east to take over the Sommedieue sector, a quiet stretch of front south of Verdun. There, it relieved a French division in the trenches October 14. The division’s next move would be November 1.

“In the Sommedieue sector, there was little doing, although it was, generally speaking, much livelier than the old days in the Vosges. All four regiments were in the line, each having two battalions in the line and one in support.” (Kenamore 246)

“It was while on this sector the first seven-days furloughs were granted to the men. Grenoble, yet uninvaded by Americans, was the first furlough area thrown open to the Thirty-fifth or other organizations of the A. E. F. The French met the train at the depot with flags, bands and cheers. Pretty girls blew kisses from their finger tips and old women waved and wiped away the tears. There were twelve hundred men of the division who tasted again of the sweetmeats of civilization. They were given good rooms in good hotels, good meals at the best eating houses, and with no cost to themselves. They answered to no call except their own whims, went where they pleased in the city, and were treated as guests.” (Hoyt 127)

These “seven-days furloughs” are important for Grandpa’s two final war stories, coming up in October. If the men are getting leave to go to a city 550 km (340 mi.) distant, the officers are as well. When a commanding officer is off-duty, remaining officers rotate through the position of “duty officer” to handle day-to-day responsibilities.

Posted by Stephen Wendell on Monday, October 01, 2018 in A Very Muddy Place | Permalink