“One day they came upon a building during a rain storm, and the guys wanted to seek shelter there. The captain forbade them from entering, so they slept in the field that night about 100 yards away. In the middle of the night, the building was destroyed by an artillery shell, and Ben received a dent in his helmet from what he thought was a piece of wood.”—Bruce Potts

September 15, 1918, the 35th Infantry Division moved during the night, as all movement now must be kept secret from enemy surveillance, into the Charmentois area on “motorbuses.” Kenamore describes the vehicles as, “…those immense lumbering cars which were stripped from the streets of London and Paris at the beginning of the war, and which had rambled all over the North of France since, hauling soldiers to many threatened fields carrying wounded back and at times playing the part of trucks and taking supplies forward.” (72)

Maybe Benjamin Potts and his buddies made jokes and pretended to be tourists, tipping their helmets back, pointing out the windows, imagining a more lovely landscape beyond the darkness.

“My goodness, Henrietta, have you ever seen such beautiful scenery?” says one soldier.

Another replies in falsetto, “Never in my life, George. I’m so glad you convinced me to go on vacation in France!”

“Most folks prefer the south of France,” says another, “but I must say the north is more to my liking.”

And still another, “All this site-seeing makes a man thirsty—Garse-on, une beer, see-voo-play!”

Maybe they all had a good laugh. Maybe they slept.

“At this stopping place [Charmentois], which was also out of doors, the air bombs became more frequent.” (Kenamore 72)

From Charmentois, “The Sixty-ninth Brigade [including Private Potts’s 137th Regiment] moved up near Auzeville [oh-zay-veel] on the night of Sept. 19-20, and the next night the remainder of the division went to the neighborhood of Grace-le-Comte (sic) Farm and into the woods east of Beauchamp, where the division relieved the Seventy-third French Division in charge of the sector.” (Kenamore 72)

This movement was on foot. On the front now, the 35th was in range of artillery fire, and enemy planes made nighttime bombing raids over the countryside. The night of September 19 may be the earliest occasion for an officer’s order, a soldier’s discipline, and Private Potts’s steel helmet to take the dent in place of his skull.

I wonder, if it had happened differently, in what body would my soul now inhabit? 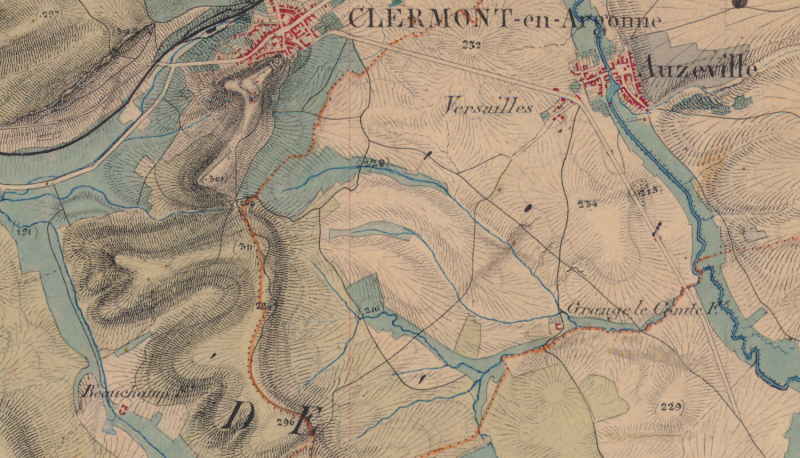 In the following current satellite image, Auzéville, the farm, the woods, and Beauchamp appear unchanged; perhaps a destination for a future pilgrimage. 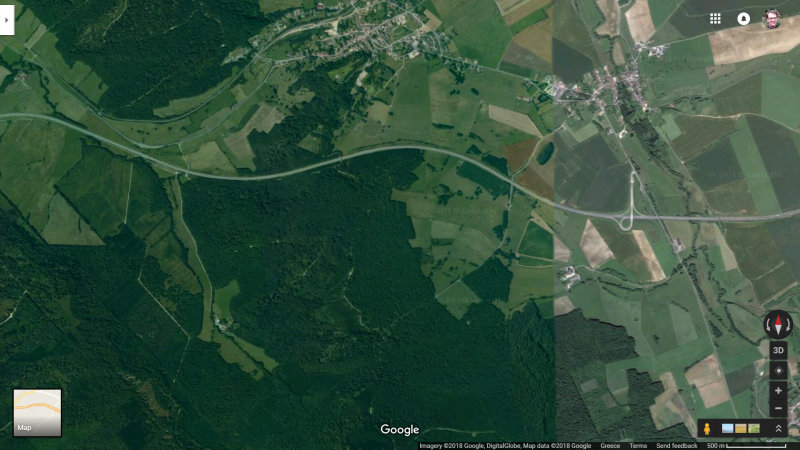 Posted by Stephen Wendell on Wednesday, September 19, 2018 in A Very Muddy Place | Permalink