Stephen Wendell
Books News The Peregrine Pages About the Author Newsletter
Enterprise, Tennessee: The Town That Died
Looking Ahead from A Very Muddy Place

“Grandpa Ben told me about a time on a train in France. They had stopped for the night and were directed to stay on the train, which was on a track next to a small French town. Some of the guys disobeyed orders, went into the town, broke into a bakery, and stole all the bread and baked goods. When the baker discovered the theft in the morning, he complained to the officer in charge. Restitution was paid to the baker, and Grandpa said the [soldiers’] punishment was severe.”—Bruce Potts 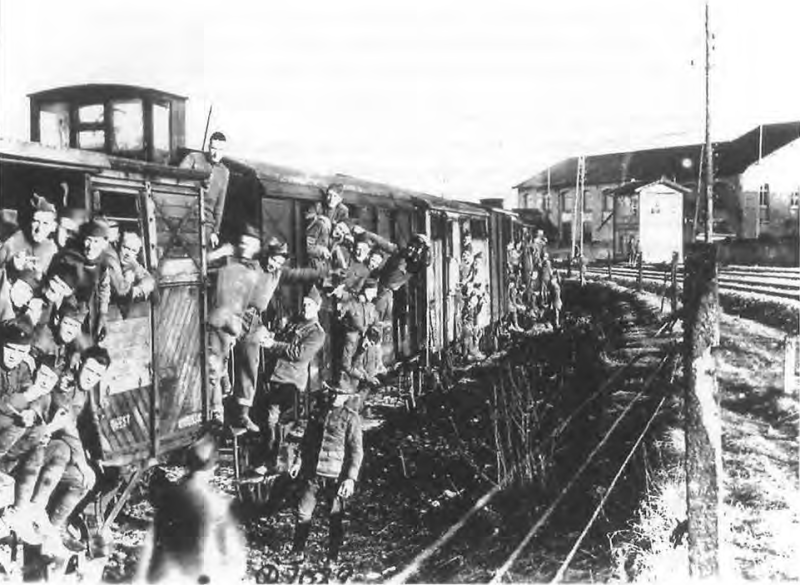 French rail cars were called “Forty-and-Eights,” after their carrying capacity, which was indicated on the side: “HOMMES 40 : CHEVAUX (en long) 8,” forty men or eight (long-wise) horses.

I remember my great grandfather, whom my cousins, siblings, and I called “Grandpa” (accent on the first syllable) or “Grandpa Ben,” from family visits to the red brick house, where he and Granny lived their quiet years in Tennessee Ridge, Tennessee.

Already in his 70s and 80s when I knew him, he walked with a cane but stood straight. He was not a tall man, 5’3” in his youth, and now his frame was slight. He wore what I thought of as “old man’s pants,” wide-legged trousers that hung from the hips, held by suspenders. The trousers were dark, but his shirt, invariably a Christmas or birthday gift from one of his children or something Granny got for him at the Dollar General Store in Erin, was always colorful. His chin was stubbly, his eyes pale blue. When he grinned, which was often, his ears perked up. He spoke around a plug of tobacco, and his voice wheezed with age, rendering his speech inarticulate to my young ears.

The family sat in lawn chairs arrayed around the carport, out of the warm summer sun. Voices, chatting, echoed between brick and cement. Children wiggled in their chairs, flicking sweat bees from their arms, as they’d been taught, not swatting. Adults sipped Granny’s iced tea from plastic cups. A fragrant breeze blew from the rose garden, and someone asked about the war.

A tobacco-stained Folger’s can beside his chair, cane hooked on its arm, Grandpa obliged with a story or two. I was too young to understand the context, but I heard mentioned far away places with fantastical and unpronounceable names, like “Lay Voadge,” the “Muse,” and the “All-gone Forest.”

My cousin Bruce Potts listened more attentively than I. His recitation above and a few more stories collected by him are the only recorded memories, that I know of, concerning Grandpa Ben in the war. Over the next weeks, I’ll include the anecdotes with the events, as near as I can work out, during which they occurred.

I’ve found no official records concerning Benjamin Franklin Potts during his time in France. A fire in 1973 at the National Personnel Records Center in St. Louis, Missouri, destroyed the service records of 18 million US Army and Air Force personnel discharged from 1912 to 1964.

The next chronological document I have is his return voyage from France in April 1919. So, if we are to continue the journey, we must turn to other sources.

His discharge paper shows B. F. Potts was a member of Company M, 137th Infantry Regiment. Some searching reveals the 137th was part of the 35th Infantry Division, which fought in les Vosges (pronounced with a soft “g”: lay vohzh), the Meuse (muz, sounds like “mud” with a z), and the Argonne Forest.

The 35th Infantry Division was composed of the Kansas and Missouri National Guard units. The division was organized into two brigades, each made up of two infantry regiments, plus support units. The 69th Infantry Brigade consisted of the 137th and 138th Regiments. The 70th Infantry Brigade, the 139th and 140th. Each regiment was further divided into twelve 250-man companies, identified by letters “A” through “M.” (Traditionally, there was no Company “J” because, in older type, the letter closely resembled an “I.”) The 137th Infantry Regiment, constituted entirely from proud Kansas National Guard units, was nicknamed the “All Kansas.”

Federalized on August 5, 1917, the 35th began training in September 1917 at Camp Doniphan, Fort Sill, Oklahoma. It left Hoboken, New Jersey, for Europe April 25, 1918. From Liverpool, across the English countryside to Southhampton, it crossed the Channel and arrived at Le Havre, France, 16 days later, on May 11.

The division’s first posting in the trenches was in the Vosges, south of Verdun. This was a “quiet sector,” that is, the line had to be held, but advancement by either side was of little strategic importance. Raw troops were sent there for practical training in the trench warfare environment.

Clair Kenamore, a war correspondent for the St. Louis Post-Dispatch, followed the 35th Division throughout the war. He tells the stories of its officers and men in the book From Vauquois Hill to Exermont (Guard Publishing, 1919). Of their time in the Vosges, Kenamore writes:

“When the Americans came to the Vosges, the trenches were in the positions established more than three years before when the French invaded Alsace and dug in when stopped. The opposing armies had seemed to agree that the decision would be gained to the northwest, on other fields of fame, so they sent tired troops to the Vosges to rest or filled the line with territorials. A few shells were sent over each day, a few infrequent raids were made at night to learn what troops were opposite, wire was kept in good shape and trenches and dugouts were maintained in good repair, but little beyond this was done. The great war was allowed to rage elsewhere. No men were sacrificed in this part of the world.” (52)

After disembarking the Tunisian at Liverpool on September 4 (counting 11 days for the trans-Atlantic voyage), B. F. Potts would have entrained to England’s south coast, maybe at Southhampton, then crossed the English Channel to a French port, most likely at Le Havre, Cherbourg, or Calais (King 105). From the coast, another train, of Forty-and-Eights, would take him to meet his unit in the country’s northeast. The entire trip from Liverpool to the rendezvous with the 35th could have taken as little as three days, arriving by September 7.

The dates and places in the previous paragraph are conjecture on the author’s part, derived from similar (documented) journeys of AEF units. The intent is to arrive at the earliest date Private Potts could have joined the unit.

According to Kenamore, “…on the fourth, fifth and sixth [of September] the division entrained for what was known vaguely as the Rosiers area.” (69) The 35th remained in the area of Rosières-aux-Salines (rosy-air oh sal-een), a town north of the Vosges, until the night of September 10, when it marched northwest to the suburbs of Nancy. So, even if the trip from Liverpool took as long as six days, arriving September 10, Private Potts would have joined his unit at Rosières. Therefore, any stories I heard concerning “Lay Voadge” Grandpa must have been telling about his comrades.

Since there weren’t many, if any, train rides once he gained the front, the story Grandpa Ben told Bruce (at top) probably occurred during the transfer from the coast to the rendezvous point. 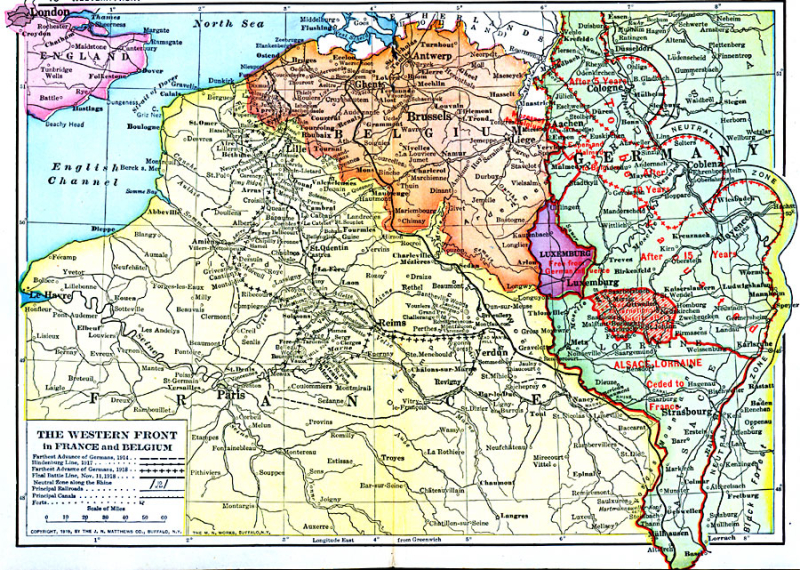 The Western Front and Railways

Crossing the English Channel by boat, Private Potts would have then proceeded by train across France to the area south of Verdun. (Look for “St. Mihiel” in small text.) The front at the time is marked on the map by plus “+” signs. Thin black lines are principle railroads. Secondary railways are unmarked.

“But we left about 100 of our men there in the foothills of the Alps [the Vosges]. They were killed in action, died of wounds or of disease or accident. I had not realized the number was so large until I came to count them up. It shows how heavy is the toll of war even in the quietest of sectors.” (Kenamore 65)

B. F. Potts replaced one of those hundred men.

Up to that time, only Company C of the 137th, had experienced combat, having executed a successful raid on German trenches in July. When he joined them in early September, Private Potts’s comrades in Company M, though hardened to field rations, going without a bath, and marching in mud, were as green as he was. We might imagine the Kansas boys gave the Tennessean a hard time anyway.

September 12—In Reserve at St. Mihiel

From Vauquois Hill to Exermont: A History of the Thirty-Fifth Division of the United States Army by Clair Kenamore, St. Louis: Guard Publishing, 1919.

Posted by Stephen Wendell on Friday, September 07, 2018 in A Very Muddy Place | Permalink