In 1913, the German-owned Hamburg America Line launched a series of three steamships, each one larger than its predecessor. The first, the Imperator, was larger than the Titanic, which sank in the North Atlantic the year before. The Vaterland (“Fatherland” in German) was the second. It measured 290 meters (950 feet) in length and carried 54,282 tons of cargo. Third in the series, the Bismarck carried 300 tons more and was 2 meters (6 feet) longer. 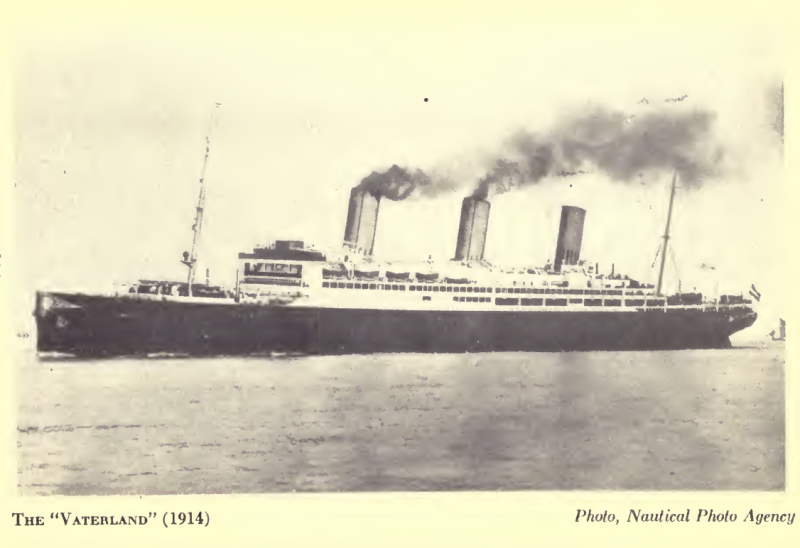 At the outbreak of war, the Imperator and the Bismarck were at port in Hamburg. The Vaterland was moored at Hoboken, New Jersey.

In the morning of April 6, 1917, the day the US declared war on the German Empire, American army troops seized the Vaterlund at its mooring in the Hoboken harbor. Within weeks, the ship was pressed into service as a troop transport, renamed the Leviathan. Clyde Brake Potts, the Leviathan, Hoboken, September 29, 1918
Where his brothers listed their father’s name as next of kin, the youngest boy gave Mrs. Ellen Potts, mother.

September 29, 1918, while his brothers Roy Albert and Benjamin Franklin fought in the Somme and the Meuse, Clyde Brake Potts, Company G, 57th Pioneer Infantry, boarded the Leviathan at Hoboken, New Jersey, bound for the war in Europe. 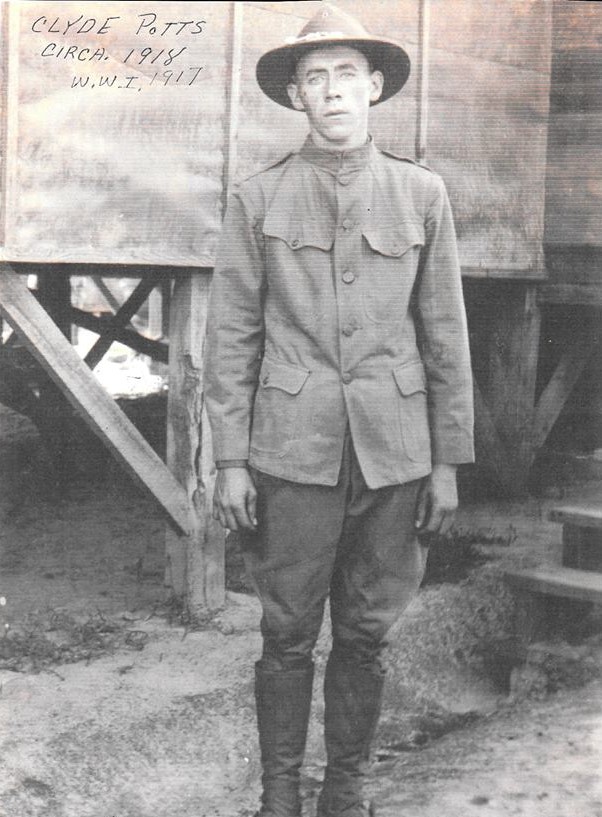 In regulation use from as early as the 1870s, the campaign hat was standard issue to US Army soldiers throughout the Great War. However, its stiff, broad brim and four-cornered “Montana peak” made the felt headgear difficult to store when not needed. Upon entry into the war, the US Army adopted the narrow, creased cap from the French. The bonnet de police, made of soft cloth, could be folded over a belt.

In 1917 and early 1918, the cap was issued in France and, so, came to be known as the overseas cap. By mid-1918, the men exchanged their campaign hats for overseas caps at the Stateside port of embarkation. Therefore, in the photo, Uncle Clyde, who was drafted in late 1918, must be in the US, either, at Camp Wadsworth or at Camp Merritt.

At first the troops disdained the new and less aesthetic head cover. Though, as it was issued only to soldiers serving in Europe, the overseas cap, worn cocked to one side, became a symbol in which returning troops took pride.

Posted by Stephen Wendell on Saturday, September 29, 2018 in A Very Muddy Place | Permalink