September 30, 1918, what was left of the 35th Division lay in defensive positions built by the 110th Engineers the previous day. These were a long series of short, shallow trenches, not man-height but deeper than a foxhole, from which the troops might repulse a counterattack. The division would lay here throughout the day, under continuing shell fire.

During the first three days of the advance, the 110th Engineer Regiment’s job was to build and repair roads for horse-drawn vehicles, which brought ammunition, rations, and equipment from the rear. Behind the front lines, the engineers filled a noncombatant role.

At 10:00 p.m. September 28, by order of General Traub, the 110th Engineers were made division reserve, therefore, combatants, and equipped with rifles, ammunition, and grenades.

The next day, under constant artillery fire, the engineers dug three kilometers (almost two miles) of trenches from Baulny to Sérieux Farm. When the digging was done, they dropped into the trenches, exchanged shovels for rifles, and pointed them north. Throughout the afternoon and evening of the 29th, as the exhausted infantrymen arrived from Exermont and Montrebeau Wood, the engineer officers placed them in the line. 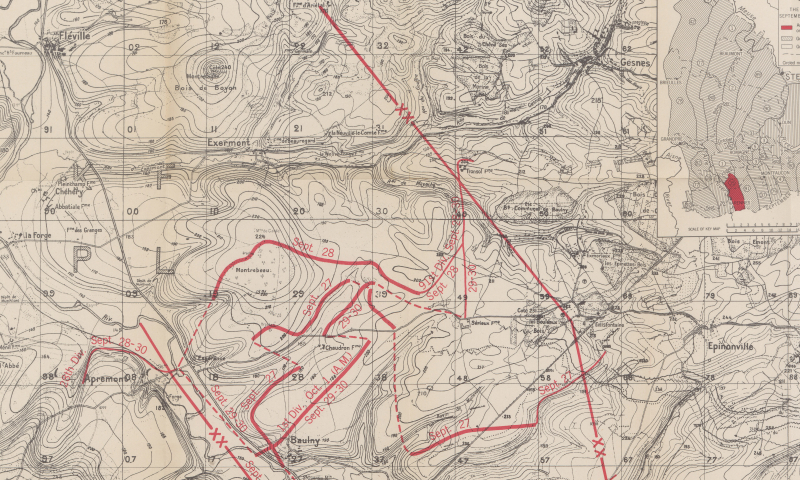 Kenamore calls September 30 “a desperate day.” The few remaining officers tried to organize the line for defense, but in some parts of the trenches, the troops were too bunched up; one artillery shell could take out several men. In other parts, they were too thin; machine gunners held sections without riflemen in support. Fatigued, hungry, thirsty, sleep-deprived, many suffering from dysentery, the men had reached the physical limit of functioning.

“Despite all the men could do to fulfill the dictates of duty, the supreme weariness of the last four days of fighting, now entering on the fifth, was not to be easily triumphed over. What they did was by sheer will, for bodies were numb and reacted slowly to thoughts that would drive them.” (Hoyt 119)

Posted by Stephen Wendell on Sunday, September 30, 2018 in A Very Muddy Place | Permalink