My great grandfather, Benjamin Franklin Potts, was a U.S. infantryman in the Meuse-Argonne Offensive, near Verdun, France, in 1918.

My Nanna once asked him, “Well, Daddy, what did you think about France?”

At 24 years old, B.F. Potts was a soldier in the 137th Infantry Regiment, which was part of the 35th Infantry Division. In September 1918, the 35th was ordered to take the “Vauquois Zone,” a sector with a 2-mile wide front which included the Butte of Vauquois (pronounced /voh-qua/).

The Butte of Vauquois is a hill raising 100 meters (330 ft.) above the surrounding countryside. The hilltop provides a commanding view of the terrain on three sides, including the strategic railway from Verdun to Paris.

The German army moved into Vauquois in early September 1914 at the beginning of the war. By the end of the month, the French tried to retake the hill, and the battle for the Butte of Vauquois began. The battle here would rage for four long years.

Before the war, a couple hundred people lived in the village of Vauquois at the top of the hill. From the start of the battle until the end, the hilltop was showered with artillery. In the spring of 1915, when ground offensives became ineffective, a war of mine-and-counter-mine began. 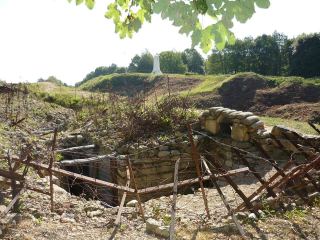 Summit of the Butte of Vauquois, August 2009, showing German trenches (foreground), mine craters (middleground), and the French monument to the combatants and the dead of Vauquois (background)

After several months in place, the German troops had constructed a network of trenches that, coupled with the steep terrain, made a formidable defense against ground attack. So the French would dig a tunnel from a protected side of the hill to a position they gauged to be beneath the enemy trenches, pack in a few tons of explosives, light the fuse, and run like hell. The resulting explosion would create a crater on the surface, its size roughly corresponding to the amount of explosives used.

That’s what “mining” means to a ground army. When the enemy catches on to what you’re doing and starts listening to the ground and making their own tunnels beneath your tunnels and packing explosives in them, that’s what they call “counter-mining.”

The largest mine used at Vauquois was set by the Germans. It contained 60 tons of explosives. It made a surface crater 80 feet deep and 300 feet wide and killed 108 French soldiers in two lines of trenches. The war of mine-and-counter-mine went on for three years, until April of 1918.

By the time Private Potts arrived in September, France must have been a very muddy place, indeed.

Sources: I put together this article from a few photocopied pages of a larger work of family genealogy and history assembled by my great uncle, John Wesley Potts, and a visit to the area and its museums in 2009.

After the war, the ground was littered with explosives and still is today. The former inhabitants of the hilltop village re-established their community at the foot of the hill.

The website of the Association of the Friends of Vauquois and its Region has a couple of nice photos and information on visiting the site.

The guided tour of the underground galleries where the mine war took place is enlightening, educational, and horrific.

Posted by Stephen Wendell on Monday, May 30, 2016 in A Very Muddy Place | Permalink