My cousin Bruce recently sat down with Uncle Jesse, Ben’s last surviving child, to refresh their memories, to tell the old war stories again, second-hand now that the main character is no longer with us. The quote above stuck with Jesse and his twin brother, Wesley, because their father often recited it.

For the officers and non-commissioned officers in charge, military training is an exercise in organization. Equipment must be requisitioned and delivered to the training field; trainees must be housed, clothed, and fed three times a day; they have to be moved to and from the training site. Actual training takes place only a few hours per day.

For the soldier, military training is an exercise in patience. But while a soldier waits, the devil called boredom is his companion, and moral suffers. Busy work is a common solution.

Camp Gordon in Chamblee, northeast of Atlanta, Georgia, was one of 32 military training camps that sprang up near America’s large cities in 1917. As part of his War Preparedness Movement developed in 1914 while he was Army Chief of Staff, General Leonard Wood called for training camps to be built near cities with rail access and a large water supply.

Soon after the declaration of war, the camps were under construction as trainees were moving in. All those clapboard buildings needed painting. As did the stones that marked the borders of roads and walkways. 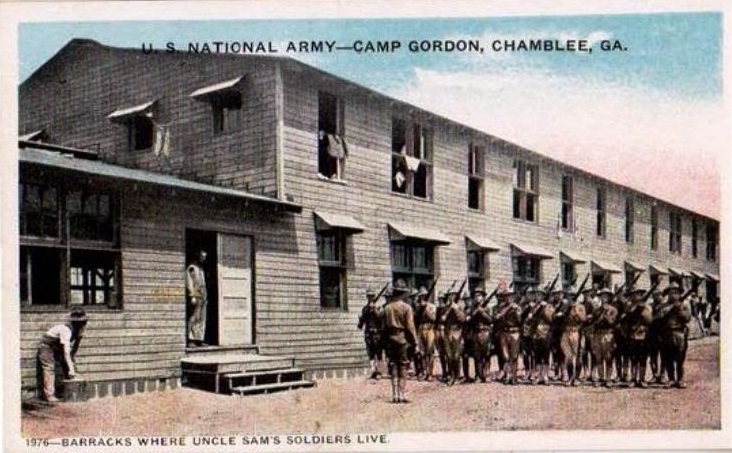 During the first days of training in that hot, humid Georgia July of 1918, Private Potts and his comrades would have learned military courtesy and drill and ceremony, instilling the high degree of discipline required of a soldier. Later, they learned the use of arms. Most American boys of the era were familiar with hunting rifles, which is fortunate since, due to lack of equipment, they often trained with wooden stakes.

The latter part of the six-week training period would have included two divergent forms of combat tactics: maneuver and trench warfare. In the early days of the Great War, the Allies employed maneuver warfare to combat the invading German army, pushing it back or recoiling before its advance. However, improved technology, notably more accurate, mobile artillery and the machine gun, made the battlefield a more lethal environment. The Allies dug in to secure their gains or prevent further losses.

Pershing advocated, not formations facing-off in open fields as in battles of the American Civil War, but large-unit maneuver tactics, where the infantry advances through opposing lines, pushing the enemy off the field. At the same time, Pershing acknowledged the role of trench warfare and allowed for its basic instruction in the training program.

Abandoned in 1921, the Camp Gordon site became a naval air station during World War II. Today, a plaque among the hangars of Dekalb Peachtree Airport marks the site of the World War I training camp.

Almost 70 years later, while the times of painting clapboard buildings and border stones were long passed, during my own Army training in 1987, my comrades and I laughed at the same aphorism:

August 24—Embarkation, the Tunisian, and the Bridge of Ships

Posted by Stephen Wendell on Monday, July 30, 2018 in A Very Muddy Place | Permalink