It’s difficult to imagine the Grandpa I knew as a young man, in the prime of his youth, in the uniform of a World War I infantryman. But there he is.

Unseen, a pair of aluminum tags hang around his neck on a cord, tucked beneath the tunic. Each, the size of a half dollar, is stamped with the soldier’s name, rank, serial number, and unit. In the event of his death, one of these tags stays with the body, while the other is used to record the casualty. This grim necklace would eventually be removed for the last time by Ben Potts, civilian.

The wide brim of a shallow-crowned steel helmet, fastened with a leather chin strap, shields blue eyes from the sun or, more often, from rain. When the soldier finds occasion to grin, his ears perk up, raising the brim.

Like the WWII and Vietnam-era “steel pot” helmet with which we’re familiar from so many movies, the WWI helmet, with its characteristic wide brim, wasn’t intended to stop bullets. It would protect the head from flying debris, including shrapnel, sometimes. Not until the introduction of the Kevlar helmet in 1983 could a soldier hope his headgear might keep high-velocity lead outside the brain pan.

It’s in company formation where Private B. F. Potts stands out. In the ranks, every man looks identical: standing at attention, heels together, arms to the sides, fingers curled, chin up, chest out, shoulders back, stomach in, eyes front. Inspecting the troops prior to battle, a captain peers down at the top of a helmet.

In the maneuver warfare that would push the opponent from the field and, thereby, win the war, soldiers often meet the enemy in hand-to-hand combat. The rifle, bayonet fixed, becomes a spear and a club. This is a contest between “the quick and the dead.” It is a contest won by larger men. 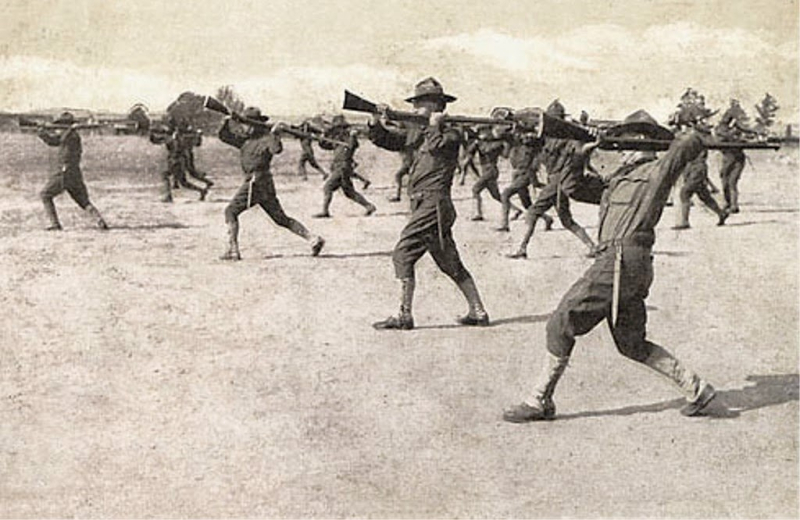 Also in maneuver warfare, communication between commanders on the battlefield is key to victory. Orders are given and units move forward, engaging the enemy. As the battle develops, orders are changed; new orders must be given. Whereas wires link telephones in the trenches, no such luxury is afforded commanders of units on the move. These commanders write orders and messages on paper and rely on an agile—and often lucky—soldier to avoid artillery, bullets, and getting lost to deliver the missive.

The messenger was often called a “runner.” The soldier with a low profile makes a better runner.

“Fall out, Private Potts. I have a special job for you.”

The dialog above is fictional. In one of Grandpa’s oft-cited stories (which I’ll let my cousins Bruce and John tell in a future installment), the infantryman, wishing to visit his brother in a field hospital, gets permission from a certain artillery officer. In another story, the private is alone when he encounters an enemy soldier.

If we are to accept the man’s hundred-year-old stories as truth—and if we do not, we might as well have not set out on our present journey—then we may desire to render plausible the infantryman’s connection to the artillery officer, as well as the solo encounter with the enemy. I propose that Private Potts was selected to be a runner.

At my prompting, Bruce asked Uncle Jesse if Grandpa was a runner. The response was affirmative. Bruce writes, “…he was a messenger, traveling from camp to camp, often under fire when he was crawling through fields.”

Here, we are accepting the risk that, instead of prompting the recollection, we created a false memory with the question. In either case, that Private Potts was a runner is, as far as I’m aware, new information, albeit obtained second-hand and a hundred years after the fact. Skepticism on that point is justified. The anecdotes remain.

September 19—A Potts Family Day of Thanks

Posted by Stephen Wendell on Sunday, September 16, 2018 in A Very Muddy Place | Permalink