“That first of September was a notable day, although it did not appear so at the time, for it was the last time the men were to sleep under cover for more than a month, and that month the most trying in their histories.” (Kenamore 69)

By the time Private B. F. Potts joined the 35th Infantry Division in the Rosières area, they had spent their last night indoors. By Kenamore’s account and others, rain fell on the region during much of September. In the hurried preparations for battle, sit-down meals, showers, and even a change of clothes were not to be had for the coming weeks.

Resting during the day, the 35th Division troops marched through the nights of September 10 and 11. In Heroes of the Argonne, a book about the 35th Division in the war, author Charles B. Hoyt describes the scene:

“There are no lights, for smoking is forbidden where there is danger of enemy planes swooping down at any minute. There are no noises, save for the jangling of accoutrement and the crunch of the hobnailed soldier. On such marches the soldiers do not talk much among themselves. They have rifles and seventy-pound packs to think about. What more could be asked to keep one’s mind occupied?

“The road is jammed with moving troops. The advance is made by paces. The men take the distance of a few yardsticks ahead; then stop, and stand in inactivity while a cold drizzle washes their faces and adds pounds to their packs.

“The men wear out as the night wears on. Their clothing is saturated; their packs weigh over the seventy pounds now; and shoulders are numbed. When the column halts, they halt in their tracks and slump into the mud.” (54) 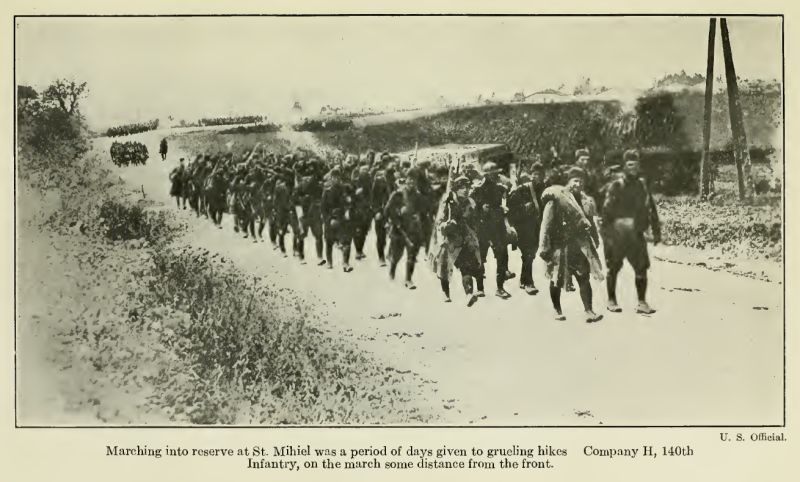 The photo shows the 140th Infantry Regiment, also of the 35th Division, on the morning of September 12. Private Potts, with the 137th Regiment, marched this road, or another nearby, the same morning

On the morning of September 12, the division moved into concealed bivouac in the Forest of Haye, west of Nancy.

Not three months before, Bennie Potts was a railroad man in the quiet hills of Tennessee. Now, Private Potts was an infantryman in France, a land ripped open by four years of war.

It must be an extraordinary sensation, to find yourself in a strange place, a foreign country, in a military environment where everything you do is an order, direct or implied. What’s more, it’s a hazardous place, where accidents maim and kill, where disease lurks, where the rain is often made in metal and brings explosive flowers that smell of poison gas.

Memories of home and family, childhood images, bright fields, shaded woods, his father cutting timber on a river bank, himself leading a workhorse, trailing logs between trees… All fade against the stark landscape. Slight hills fold into one another, long, low lines devoid of silhouettes. The trees, here, have lost leaves as well as branches, as if in a hellish storm.

Remembering his training, remembering the movements, the sequence of actions, forgetting the green Georgia woods where they were pressed into the mind, the soldier follows orders. He concentrates on the job at hand, does what must be done, right now. Of the past and of the future, he thinks not. He dares not, lest a moment’s distraction at a critical instant deprive him of all past memories and of any future whatsoever.

While the Americans had fought smaller engagements and played a significant role in the Aisne-Marne campaign in July and August, up to now the divisions, led by American generals, had fallen under the command of French and British corps commanders. One of General Pershing’s objectives as commander of the American Expeditionary Forces was to establish an independent American army, which he did on August 10, 1918.

By September, Pershing pointed the American First Army, over one million strong, at the Saint-Mihiel salient. A “salient,” in military terms, is a bulge in the front line. Because a salient’s defenders are exposed on three sides, the situation is tolerated only if the area contains strategic terrain.

“Resulting from a German offensive in September 1914, the St. Mihiel salient was a 200-square-mile triangle jutting fourteen miles into the Allied lines between the Moselle and Meuse rivers. Bounded by Pont-à-Mousson to the south, St. Mihiel to the west, and the Verdun area to the north, the terrain was mostly rolling plain, heavily wooded in spots. After three years of occupation, the Germans had turned the area into a fortress with heavy bands of barbed wire and strong artillery and machine-gun emplacements. Eight divisions defended the salient, with five more in reserve.”—American Military History Volume II 42 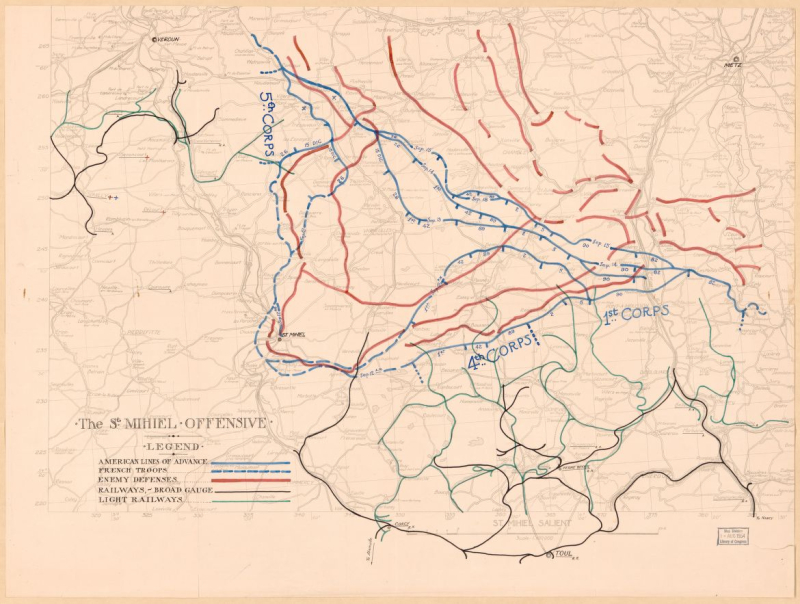 The 35th Division was in the Forest of Haye, west of Nancy, lower right, off the map

The battle of Saint-Mihiel (September 12-15) would be Pershing’s first operation as army commander. He assigned the 35th to the strategic reserve, whose purpose is to replace a weakened unit or to fill any gap in the line created by the enemy. The Germans learned details of the impending attack, including the size of the opposing force, which was much superior to their own. As the Americans launched the offensive, the German army was in retreat. The battle went so well against the disorganized enemy Pershing didn’t need the reserve. The 35th waited under rain.

The troops of the 35th would be “blooded” soon enough; the future was saving them for a greater fight. Eleven days after the battle of Saint-Mihiel, they would be in the line before the Butte of Vauquois, one of the most heavily defended points in the German line. The Meuse-Argonne Offensive would be the decisive battle of the Great War.

Posted by Stephen Wendell on Wednesday, September 12, 2018 in A Very Muddy Place | Permalink