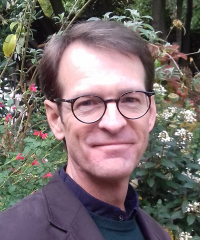 Stephen Wendell was born in Michigan, grew up in Tennessee, and escaped from a college in South Carolina. In 2001, he adventured to Paris, where he makes base camp.

Inspired by world history and culture, Stephen browses libraries and tours museums and monuments; he explores medieval castles and ancient ruins, and he travels to legendary places and lands of myth. Stephen writes about these places and the people and things he discovers on his expeditions in the Peregrine Pages, and he delves into fantastic realms at DONJON LANDS.

Stephen is the author of the Littlelot series of adventure books for children and the grown-ups who read to them. In 2018, he followed his great grandfather from Tennessee to the Great War in France a hundred years before. Stephen recounts his ancestor’s war stories in A Very Muddy Place.