A Road Formerly Known as Roman

The archaeologist flung an arm out the car window, pointing. I braked. Tires scraped the gravel in the road that runs from the west Crete village of Rodopos to Menies Valley on Rodopou Peninsula.

She pointed just behind. “Back there.”

I reversed the gear and backed slowly.

Her enthusiasm was all the prompting I needed. I pulled the parking brake, and we jumped out. Midday summer sun beat down on the car in the middle of the road as well as on our heads. A north wind cooled the skin and brought the scent of thyme from across the Cretan maquis. A chorus of chirping cicadas thrummed to a steady beat.

We were here to see exposed parts of what I used to call the Roman road on Rodopou. A milestone was unearthed near Rodopos village at the beginning of the 20th century. Dated 129-132 AD, it bares an inscription in Latin. From a translation, we know the ancient road was eleven (Roman) miles long and “built or rebuilt” by the emperor Hadrian, who also receives credit for rebuilding the temple at the end of the road in Menies Valley on the peninsula’s northeast coast. 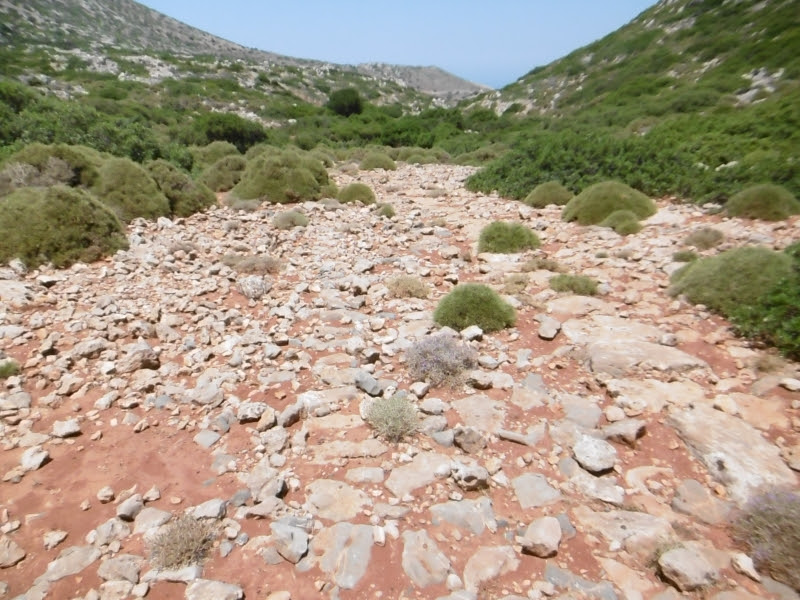 After nineteen hundred years, the ancient road looks like a jumble of rocks. I always look for stones in a straight row that line the edge or middle of the road. In this photo are two such rows.

Yours truly spent a large portion of the previous summer traversing the peninsula, finding bits of the ancient road, discovering its path through the crags of crystalline limestone. Because, as I often say, “You gotta have a hobby.”

When I mention the road, many local archaeologists dismiss the topic. Roman—which is to say, the former empire dating from 69 BC to 380 AD on the island—isn’t old enough. Much richer fields for Roman-era sites lie elsewhere. Archaeologists come to Crete to study Minoan sites, which are from 3000 to 5000 years old.

We began the day from the village square at Rodopos, where the milestone now stands. We drove along the modern road, which was graded gravel, full of holes and washed out gullies. At several points, we stopped the car to walk on flat paving stones in mosaic patterns, bordered by straight rows of edge stones, all laid in centuries—or millennia—past.

Whenever her feet touched ground, the archaeologist, whose name was Jenny, scanned the ground before her. During our walks, she showed me flakes of obsidian (not found naturally on the island, therefore imported) and smooth stones that fit in a cupped palm (tools for grinding grain or sharpening blades) and bits of terra-cotta pottery.

From the shape of a potsherd, Jenny could tell whether it was from a pot’s base or neck. From the curve, she could tell its circumference; from marks on the inside, whether the pot was turned on a wheel or shaped from kneaded clay. From the coarseness, she could tell the era in which it was made.

Now we scrambled up a steep embankment. Jenny, shod in ankle boots, went to the right across a precarious slope. I, in sandals, went to the left, up a gentler slope to come around to the sighted rocks from above. I grabbed the sturdy branch of a lentisk shrub to pull myself up. My eyes passed a rounded shape in the earth, terra-cotta in color. Its perfect curve peeked between gnarly roots.

I hurried over to where Jenny surveyed a straight row of large, gray stones, roughly cubicle. At the row’s end, another stone lay at a right angle to it.

“This wall goes through here,” she said, indicating a mound covered in brush, “and up that hill.”

Another stone, similar to the others, clung to the slope.

“A building of some kind?” I said.

“You see the size of the stones. If a stone is heavier than what two men can carry, it’s probably ancient.”

I didn’t see how enough men could even get around one of those stones to carry it.

“Or earlier. It’s hard to say. If we could find some pottery, we might be able to narrow down the period.”

“I saw something interesting on the way over here.”

Jenny’s eyes lit up, and I started back the way I came.

On the slope beneath the shrub again, I stood on a flat rock at the edge of the precipice. I pulled a camera from my pocket and took a photograph of the object. I hoped I wasn’t taking a picture of a nicely shaped dirt clod in situ. Then I picked it from crumbling dirt. The curve was as long as a hand. Three edges were jagged. The unbroken edge, rounded and smooth. Even an amateur eye could discern the lip of a jar or a vase. I handed it to Jenny.

Examining the potsherd, she pointed with a pinkie. “The coarse, white fragments tell us it’s Minoan. And you’re standing on a threshold stone.”

I looked at my feet. The flat rock was a long rectangle, the top smooth. The middle was indented, worn by years of passage.

I followed her eyes just up the slope. The ground was encrusted with them, like fish scales.

As we made our way back down the slope, Jenny pointed out more potsherd-strewn patches. From one such patch, she lifted a small, oblong piece, blunt on one end, capped with a flat piece on the other.

She held it between thumb and forefinger. “This is one foot of a cooking pot.”

I had seen the three-footed pots in museums. They had handles on two sides and a cover.

“People lived here,” she said. “The stone walls we saw could have been a farm house or a villa. Because the ancient road passes so close, it was probably here long before the Romans.”

Now I just call it the Rodopou Road. 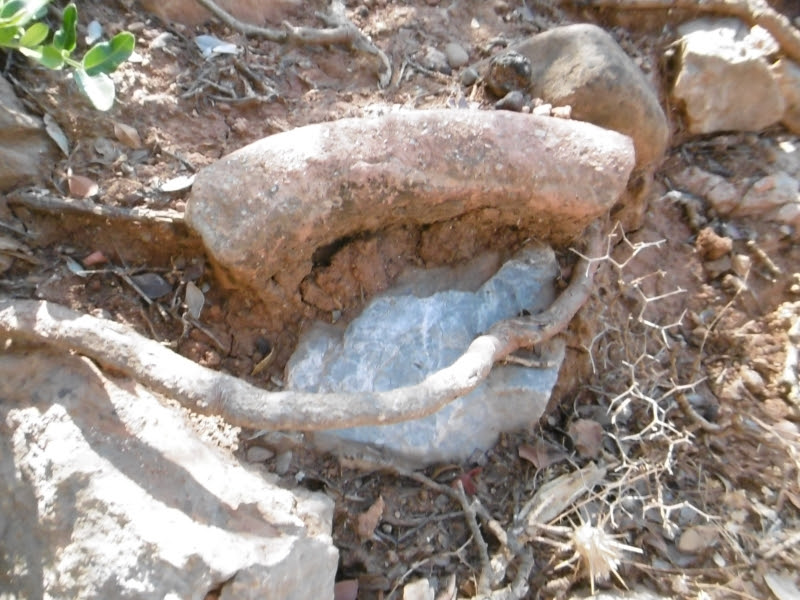