Private Potts was put on a southbound train to Fort Oglethorpe, Georgia, where he was discharged May 12. He was given train fare for home and remaining pay, plus a sixty-dollar bonus.

In a small town in Middle Tennessee, Jack and Ellen Potts stand on a platform beside the tracks. Susie, at twenty, their youngest child and only daughter, is there. As is their eldest, William Rufus, with his wife Annie and their children. Ruby and Jack run about, shoes clomping on wooden planks. Annie holds fifteen-month-old Bertha. Roy Albert, who came home the month before, now awaits his brother. Jack and Ellen’s youngest boy, Clyde Brake, would return in September.

A slim young man in uniform, plaited overseas cap cocked on his head, steps from the train as it screeches to a stop. He is clean-shaven and smiling, ears perked. The steam whistle announces a hero’s arrival, a son’s return.

In following years, Ben moved the family several times between Tennessee and Michigan for work. In Tennessee, he worked for the railroad, most notably as a detonation man, making way for new track with dynamite. In Detroit, he worked for Cadillac, from which he retired in 1962.

In 1942, at age forty-seven, Ben Potts registered for the draft the second time in his life.

“Grandpa Ben wanted to go fight in WWII and registered, but they wouldn’t take him.”

Following retirement, with the children grown, Ben and Mae moved back to their home town, Tennessee Ridge, Tennessee, where they lived in a red brick house. They tended a vegetable garden in the back yard and kept chickens in a coop. Ben drove Mae to church every Sunday. They had frequent family visits.

After Sunday dinner, the family takes refuge from the warm summer sun on the carport. Children, grandchildren, and their children sit in lawn chairs, sipping Granny’s iced tea from plastic cups. Grandpa Ben hangs his cane on the chair’s arm and cuts a plug of tobacco with a pocketknife. A fragrant breeze blows from the rose garden, and Nanna asks:

“Well, Daddy, what did you think about France?” 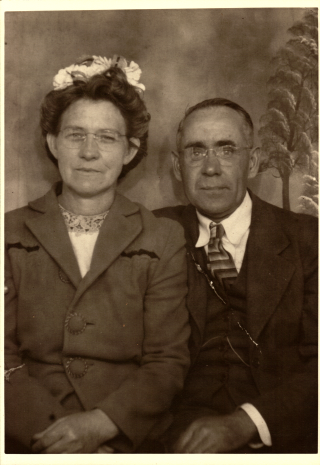 “Grandpa brought his dented helmet home to Tennessee Ridge. Granny used it as a water bowl for the chickens until it rusted out.”