Peregrine Publishing
Books A Peregrine Reads News The Peregrine Pages About the Author Newsletter
Alternate Scenario
From St. Louis to the BnF

“It happened on Monday, February 17th, that the units of the 35th were called out and formed on a wide level stretch of the Meuse Valley near Commercy. Here twenty-two thousand men of the division passed in review of the Commander-in-Chief and the ‘petit’ Prince of Wales, who was the guest of honor.” (Haterius 192) 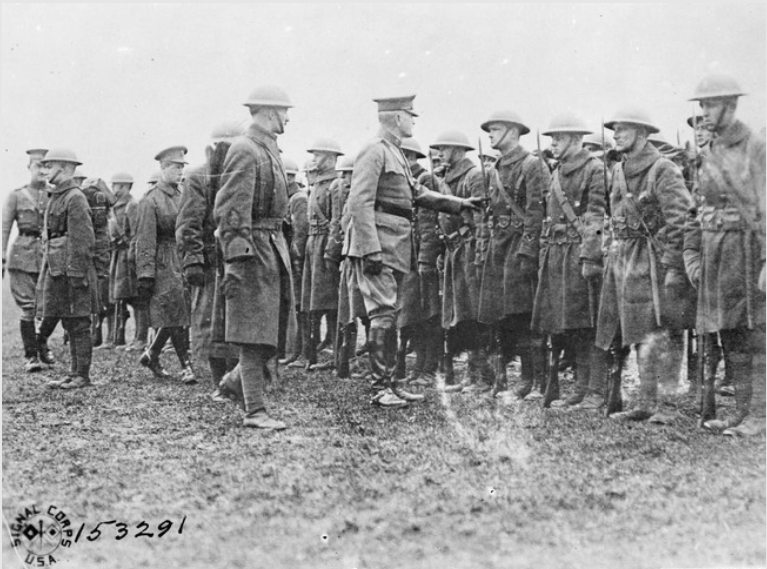 Twenty-four-year-old Prince Edward, who would become Edward VIII, King of England, and abdicate the throne to marry an American divorcée, made small impression on the men of the 35th. Ted Powell, in his book King Edward VIII: An American Life (2018), writes:

“The doughboys [of the 35th] were in awe of ‘Black Jack’ Pershing, leading the inspection with a group of senior officers on horseback, but were disappointed by the Prince of Wales… the Prince went out of his way not to look like a ‘prince,’ for example refusing to wear the Croix de Guerre that the French had awarded him, on the grounds that he had done nothing to deserve it.” (29)

In their History book, the men of Ambulance Company Number 139 (collective authors) are more specific about the parade ground location, placing it north of Commercy between the villages of Vignot and Boncourt-sur-Meuse. “The field itself, located on a broad stretch of the Meuse basin, was mush-like with mire and patched with pools of water” (74).

They describe the inspection and passing in review:

“The columns of the Division were drawn up into platoon fronts… After riding around the Division, General Pershing and his party personally inspected each platoon, winding back and forth, asking questions of the company commanders and speaking with the men.

“Having completed the personal inspection, the General and his party took position in the reviewing stand on the right. At the command ‘Pass in Review’ by the Division Commander, each battalion executed successively ‘Squads Right,’ and swept down the field in a line of platoons. It was indeed a most impressive sight, and, although the sky was cast heavy with low-hanging clouds, the sun, as if to lend color to an already beautiful picture, broke through and shone for a few moments. Then, as each column swung out upon its own way home, the rain began again…

“Although participation in the great event required that the men wear full packs for almost nine hours without removing them, and undergo a hike of twenty kilometers in the rain, not a man regretted the experience. It will be long remembered with pride by those who took part.” (74)

Recognition from leaders is the soldier’s reward. He risks life and limb and suffers daily hardships, not for pay, but for country: its values and its purpose. His recompense is the country’s gratitude for duty done with honor. It marks the personal achievement, which each soldier, before it’s met, wonders in his heart of hearts if he can accomplish.

For the troops, the AEF commander embodied the country. The commander’s acknowledgment of a job well done set the laurel on their victory.

Later that day, in an address to officers, General Pershing announced the 35th’s imminent departure and “wished the officers and men of the division Godspeed on their homeward journey” (Haterius 193).

“When Pershing visited, Grandpa was one of two men that put new shoes on his horse. When the general was ready to leave, Grandpa held the horse’s reigns while he mounted.”

April 20—Easter Aboard the Manchuria

“…he was near the spot where a shell landed and was buried under dirt.”

“Ben had been told that his brother, Roy, had died. Then he ran into someone who said, I just saw your brother over at so-and-so medical. So he went to get a pass…”

The German army was retreating before the Allied advance on the Western Front, and talk among the troops was of an end to the war, of peace, of going home.

Armistice, or A Railcar in the Woods

He is not informed, nor does he care, about the greater military and political machinations. The soldier, once the job is done, turns his mind to home and family.

Posted by Stephen Wendell on Sunday, February 17, 2019 in A Very Muddy Place | Permalink