Peregrine Publishing
Books A Peregrine Reads News The Peregrine Pages About the Author Newsletter
Success, Freedom, and Castles in the Air
Alternate Scenario

Included here are Benjamin F. Potts’s discharge and enlistment record, two sides of the same paper, accompanied by a transcript, including that of stamps and pencil marks on the latter.

Based on the penmanship (in which I am no expert), the lieutenant, signatory of the enlistment record, seems to be the scribe.

In the transcript, handwritten text is shown in italics. Where the original is illegible, I have compared with other handwritten text in the document and with similar records to derive a probable text, which I enclose in brackets. Where this is impossible, I leave an ellipsis between brackets.

The following information about the form is given in the footer margins:

Asterisks (*), daggers (†), and double daggers (‡) indicate footer notes on either side of the form. Bracketed numbers mark my own notes.

TO ALL WHOM [IT] MAY CONCERN:

Said Benjamin F. Potts was born in Slayden, in the State of Tennessee.
When enlisted he was 23 9/12 years of age and by occupation a R. R. Foreman.[3]
He had Blue eyes, D. Brown hair, Fair complexion, and was 5 feet 3 1/4 inches in height.

Given under my hand at Fort Oglethorpe, Ga this 12th day of May, one thousand nine hundred and nineteen. 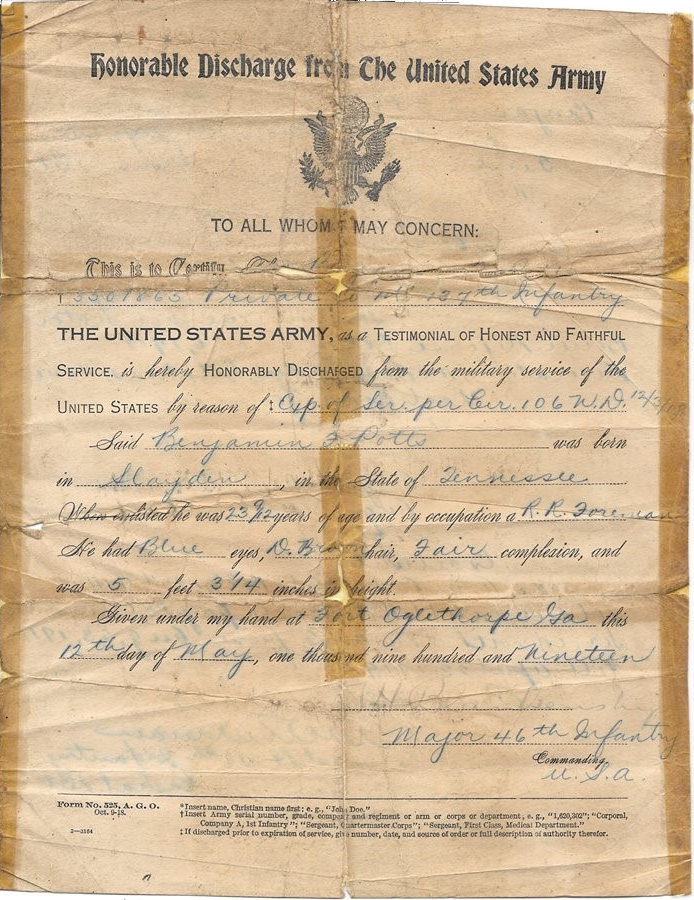 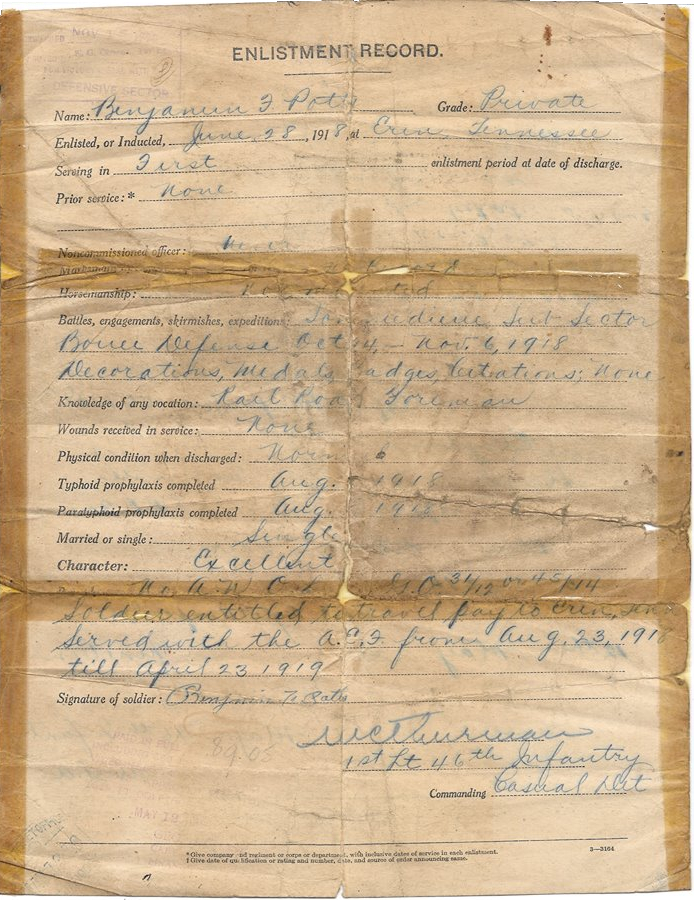 * Give company and regiment or department, with inclusive dates of service in each enlistment.
† Give date of qualification or rating and number, date, and source of order announcing same.

On the enlistment record, lower left corner, are faded stamps in red and blue and a number in pencil. The red stamp, shown first, may well be three separate stamps, separated in the transcript by em dashes.

[2] Expiration of Service per Circular 106 War Department, December 3, 1918. Circular 106 stipulates that a soldier must be discharged from the Army post closest to home.

[3] During his service, B. F. Potts was not promoted in military rank. He was, however, promoted from railroad trackman at induction to foreman.

[4] I made out some letters and guessed the rest. An Internet search reveals a Major G. H. Blankenship of the 46th Infantry signed other discharges at Fort Oglethorpe.

[5] No mention of the Argonne battle. See forthcoming article, Friday.

[6] Other discharge papers imply the Army honorably discharged only persons of “excellent” character.

[9] Casual Detachment. A “casual” is a soldier not assigned to a unit.

[10] The penciled number is a dollar amount. A private earned $30 per month. A prorated portion, $12, plus the $60 bonus, from $89.05, leaves $17.05. The army paid five cents a mile, which makes 341 miles, the distance from Chattanooga through Nashville to McKenzie, TN, on the Nashville, Chattanooga & St. Louis Railway, then to Erin on the Louisville & Nashville.

[11] Within days of the Armistice, the US Congress adopted Section 1406 as an amendment to the year’s revenue act, which was approved in 1919.

[13] Boarding the train at Chattanooga’s Terminal Station, outside of Fort Oglethorpe, Ben Potts was already in his home state.

Posted by Stephen Wendell on Wednesday, February 13, 2019 in A Very Muddy Place | Permalink