“The injury that forced Uncle Roy into the field hospital was he was near the spot where a shell landed and was buried under dirt. He was rescued due to the fact that only his hand was above ground and someone saw it moving and dug him out.”—Bruce Potts

For all the fuss over our ancestor Benjamin Franklin Potts, we mustn’t ignore his older brother, Roy Albert. Not only did Uncle Roy precede Ben to Camp Gordon by nine months, he shipped to France in May 1918, fought in the Somme, was wounded in battle, and still didn’t get home until April 1919, a month before Ben’s homecoming.

Here, then, is the story of Roy Albert Potts. I regret its brevity and that I never knew Great Uncle Roy. 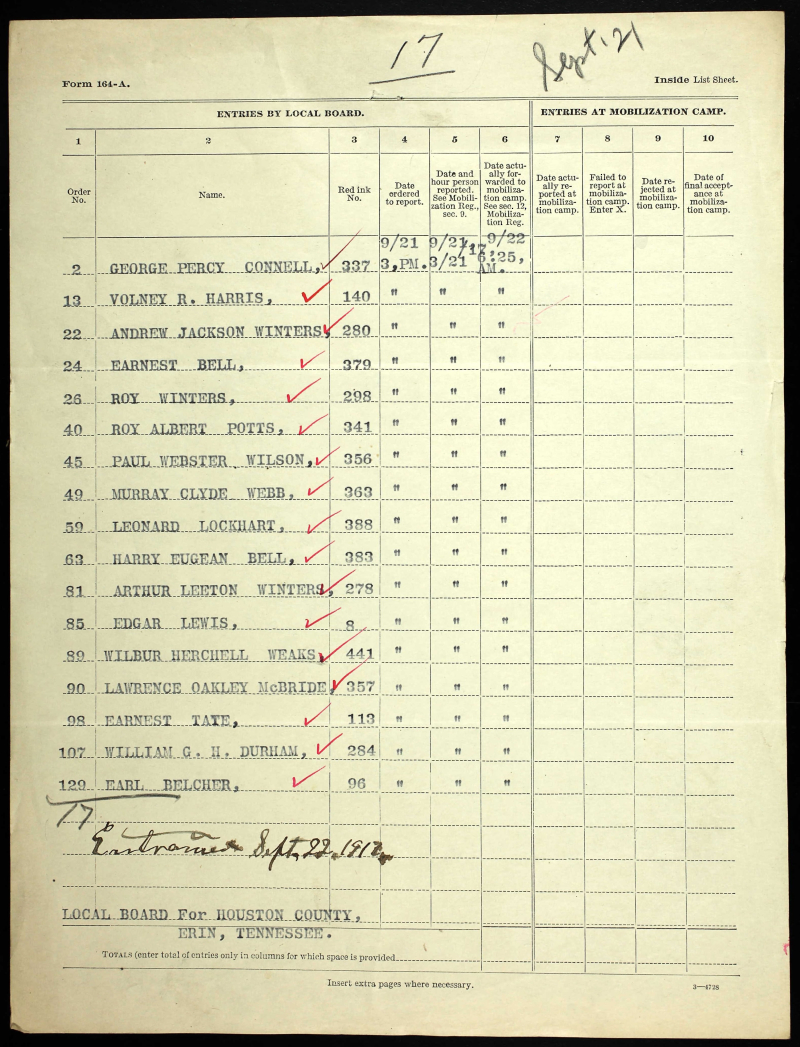 Roy Albert Potts, 24, was inducted into military service September 21, 1917, at the Houston County Courthouse. The next day, he entrained to Camp Gordon, Georgia, for basic training. In October, he went to Camp Sevier, South Carolina, where he joined the 30th Infantry Division. On May 11, 1918, Roy Albert embarked with his unit aboard the Anselm, part of a convoy headed for Liverpool, England. 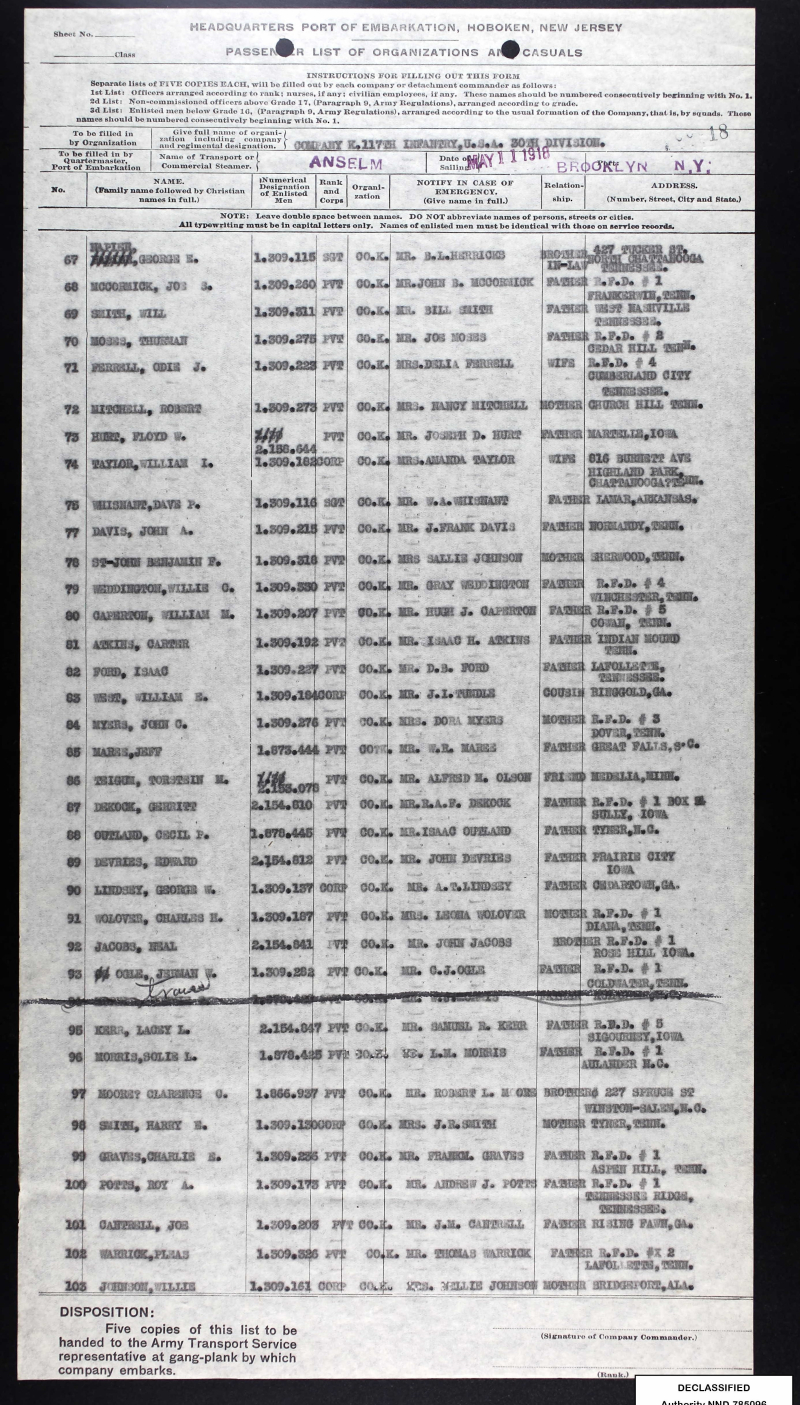 In France, the 30th Infantry Division fought under British command in the Somme, to the west of the Argonne Forest, near St. Quentin. 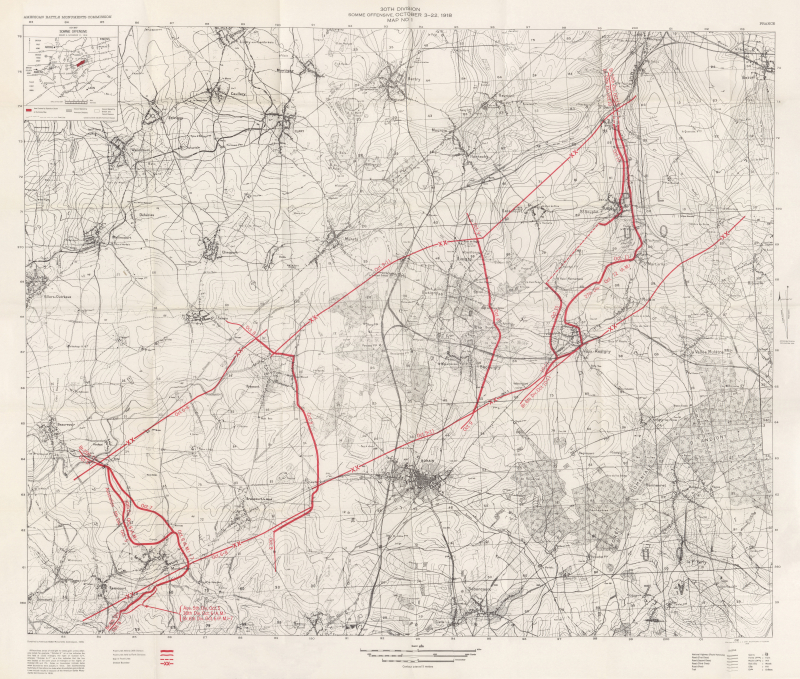 The British Fourth Army, under which the 30th Division served, had issued orders for a general attack on October 8. In order to straighten the line of departure, the 30th Division commander ordered the salient reduced in a preliminary operation the day before the general attack. The division’s 117th Infantry Regiment was in the line before the salient.

The American Battle Monuments Commission published a series of books in 1944 summarizing the operations of each division in World War I. In the volume concerning the 30th Division, operations down to company level and sometimes platoon level are noted. The following excerpt contains the only mentions of the 117th Infantry Regiment’s Company K, which was part of Third Battalion.

October 7, 1918, 5:15 a.m.—“The 3rd Battalion, 117th Infantry, attacked with Companies M, L and I in line from right to left, and Company K in close support. Company F was attached to the battalion as reserve. Strong resistance was encountered at once, but Company M gained its objective and established liaison with the 118th Infantry [on its right]. Companies L and I received heavy fire from the vicinity of Bois de la Palette, Genève and Ponchaux. The [friendly] artillery did not completely cover the left of the line and the British did not advance on that flank. Elements of the center reached the objective, but the left detachments made only a small gain. At 6:40 a.m. detachments of Company K were sent in to fill the gap which had developed between Companies L and I.” (21-22)

While Roy Albert could have been buried by the fallout from an artillery shell in fighting on any number of days before or after, the fight to reduce the salient is one in which we have an historical document noting Company K’s participation. Furthermore, according to statistics given by the American Battle Monuments Commission (pages 10, 35), the 117th took a large proportion of their wounded casualties in the period October 3-14. This, plus the excerpt’s mention of heavy artillery on the left of the salient fight, makes October 7 a likely date for the incident.

After being pulled from an early grave, Roy Albert was taken to a field hospital.

Some time later, at Vavincourt, 130 miles to the southeast, Private Benjamin Franklin Potts received word that his brother Roy was killed in action.

Posted by Stephen Wendell on Sunday, October 07, 2018 in A Very Muddy Place | Permalink