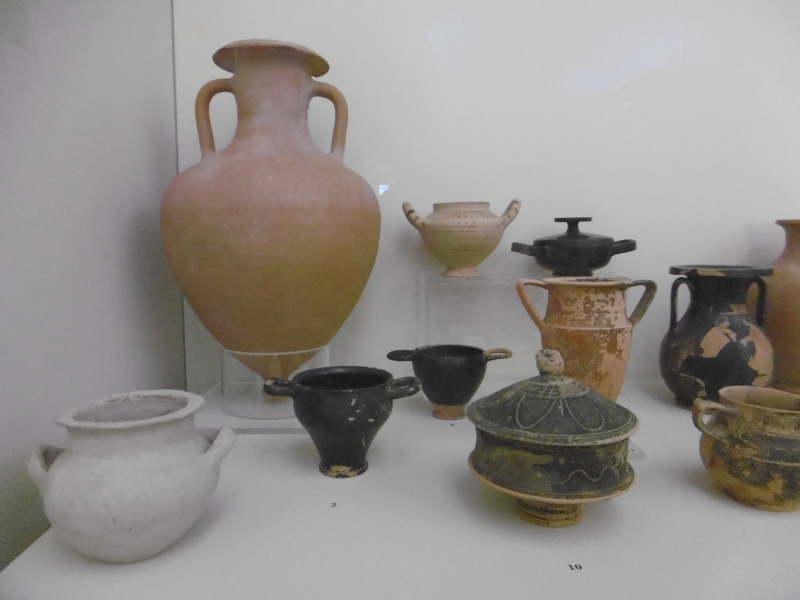 From as early as the seventh century BC, craftsmen of a river bank settlement took white clay from nearby hills to make pottery. The style, unique to the settlement, produced a simple, squat vase with sturdy handles. An example is held at the Archaeological Museum of Kissamos, along with similar wares from other regional towns.

Today, a village named Potamida, after the Greek word potam for “river,” straddles the Rema, a seasonal stream. A disused footbridge crosses the watercourse amid a jungle of bamboo, grapevines, and fig trees just below the modern bridge.

The clay hills, called Komolithi, sit above the village. Similar white clay can be seen in a thick, geologic layer all along Crete’s north coast. At Komolithi, embedded fossils of microscopic sea creatures indicate it was once a seabed. Only in two places, here and near Sitia in eastern Crete, has erosion produced such magnificent forms in the friable rock. The slender buttes reach up as high as 20 meters beneath shrubby caps. 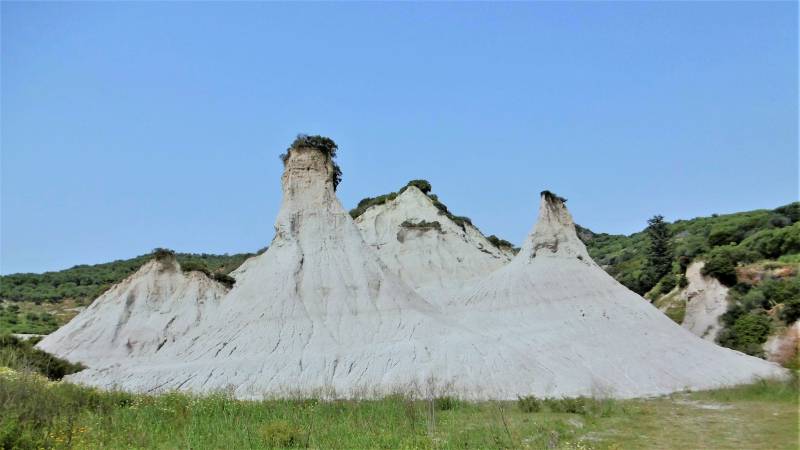 The site has become a tourist attraction, though little visited. Perhaps this is best. Wind and rain will wear it away soon enough.

Another local attraction is the watermill, which is marked with a sign from the road. The mill, reconstructed in 2013, lies down a narrow path beside the home of Marika, who holds the key, should it be locked. 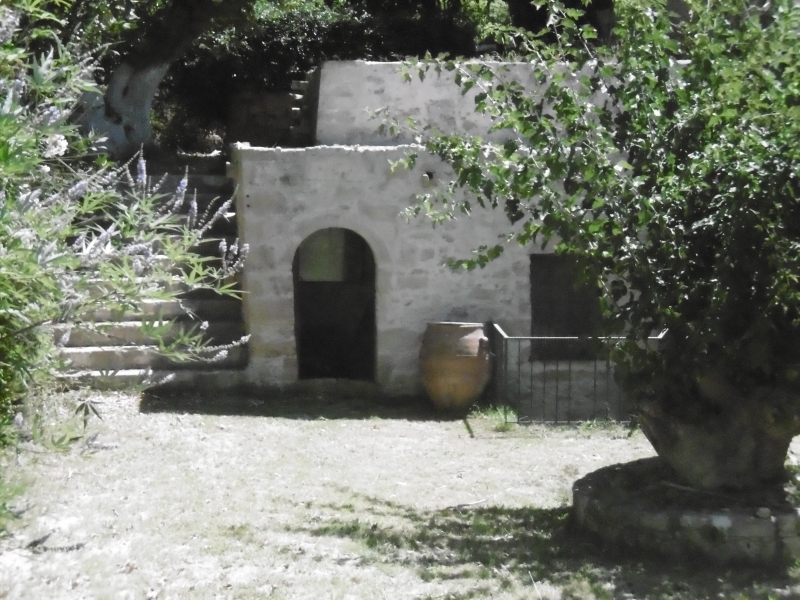 Marika is an ancient woman, stooped by age so low to the ground one must bend at the waist to shake her hand. When you do, she’ll peer up and flash a wide grin. Then she’ll treat you like an old friend, chattering in Greek. Whether you speak the language is of no consequence whatsoever. You’ll understand that Marika wants you to sit down and enjoy homemade cakes while she retrieves the iron key.

The door to the watermill should be closed, though it’s rarely locked. Inside, wall displays explain its workings. In addition to the olives that have taken over since World War II, Cretan farmers harvested crops of wheat and corn from ancient times. The grains were ground at windmills and watermills scattered around the island.

This one is a “chimney” watermill. A narrow canal, called a leat, diverts water from the stream higher up the valley. The leat is gently sloped to bring water to a point above the mill. The water then falls down a near-vertical shaft, like a chimney, and shoots out a nozzle two meters (6 feet) below the mill house. The spurting water turns a horizontal wheel. Its axle turns the millstone above. 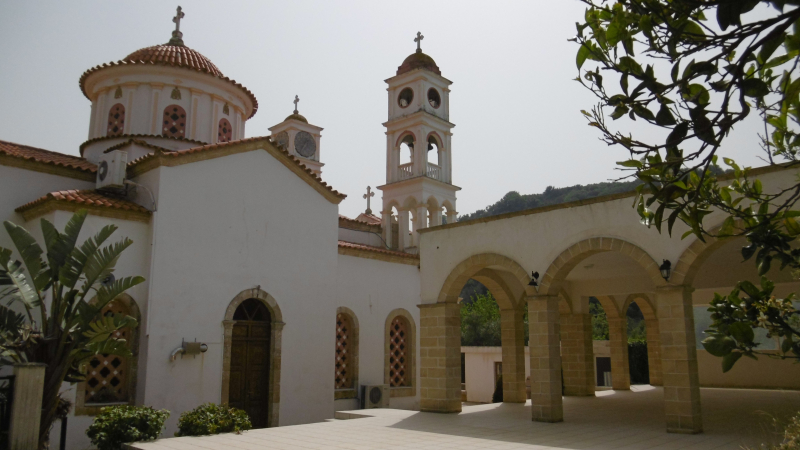 Saint Peraskevi’s Church of Potamida is not so much an attraction as it is a curiosity. Not so much the church as its bell tower, which has a clock on each of its four faces, all showing different times, none correct. Not so much the tower as its bell that rings the hour every hour… at precisely eight minutes past. In Crete, even the Greek Orthodox Church is on island time.

Opposite the church is a ruin. Carved lintels still hold open windows in stone-block walls. The interior is filled with similar stones, fallen from ceilings and upper floors. Medieval plaster clings in a haphazard pattern. Central arches resist decay. Nothing remains to hint at a construction date, much less to tell us when the wooden door, now dust, was last closed. 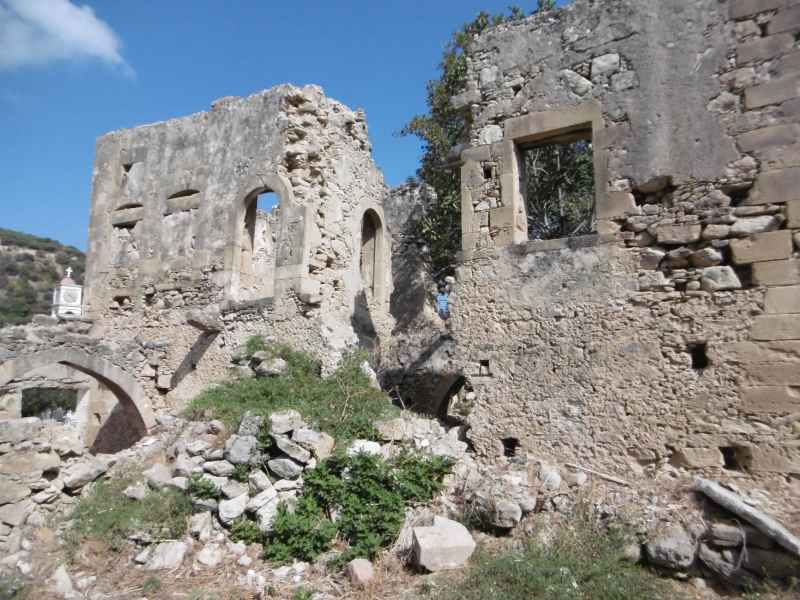 During the Ottoman occupation (1669-1898), Christians were forbidden to school their children as they were used. The now-ruined building, which had been a Venetian manor house, was used as a secret school. 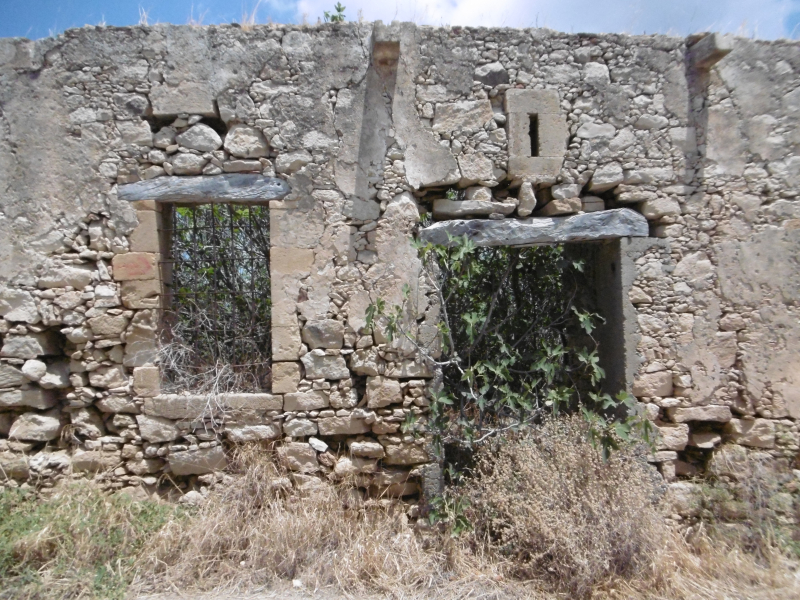 Atop a western hill overlooking the village, the Ottoman pasha’s fortified palace crumbles, year by year, into a pile of stones, held together by the roots of fig trees and caper plants that choke the interior. It, like the secret school, would have been in use until 120 years ago. 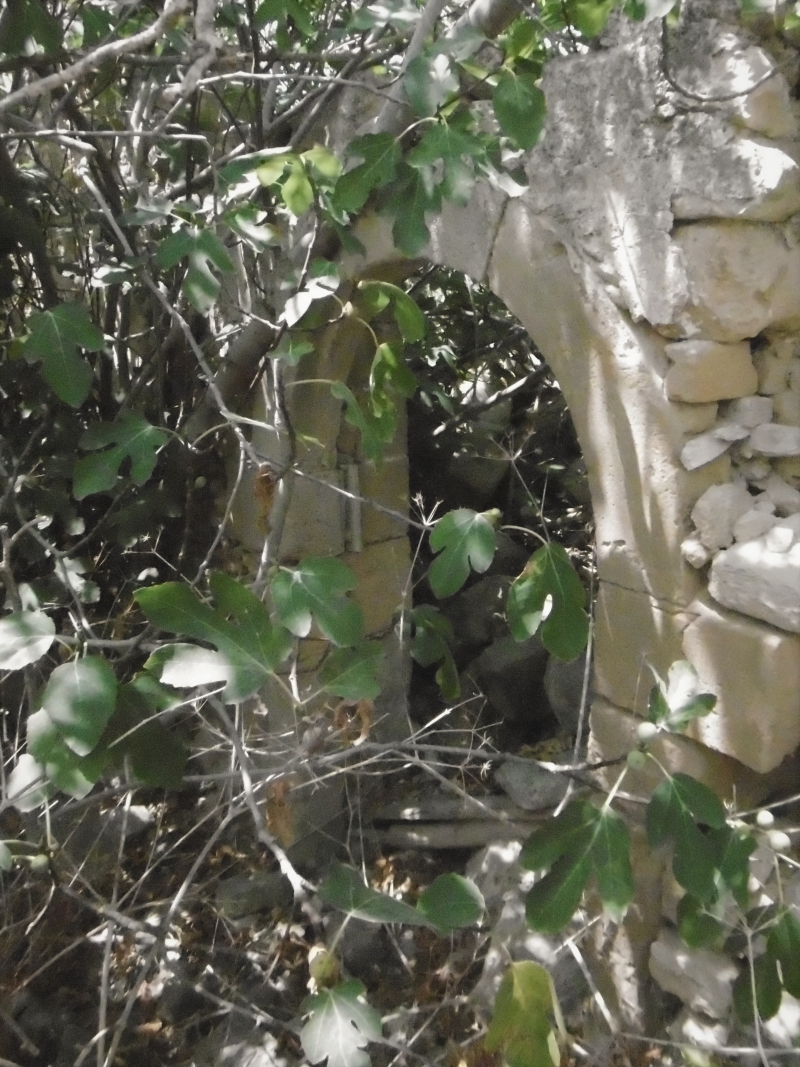 Inside the ruins, an archway yet stands

Just outside the village is the home of two fine folk, David and Juliet, an English couple, who settled in Crete 20 years ago and built a house from the ruins of The Old Olive Mill. They teach yoga and invite friends and artists to stay in extra rooms. This summer they host yours truly as writer in residence. 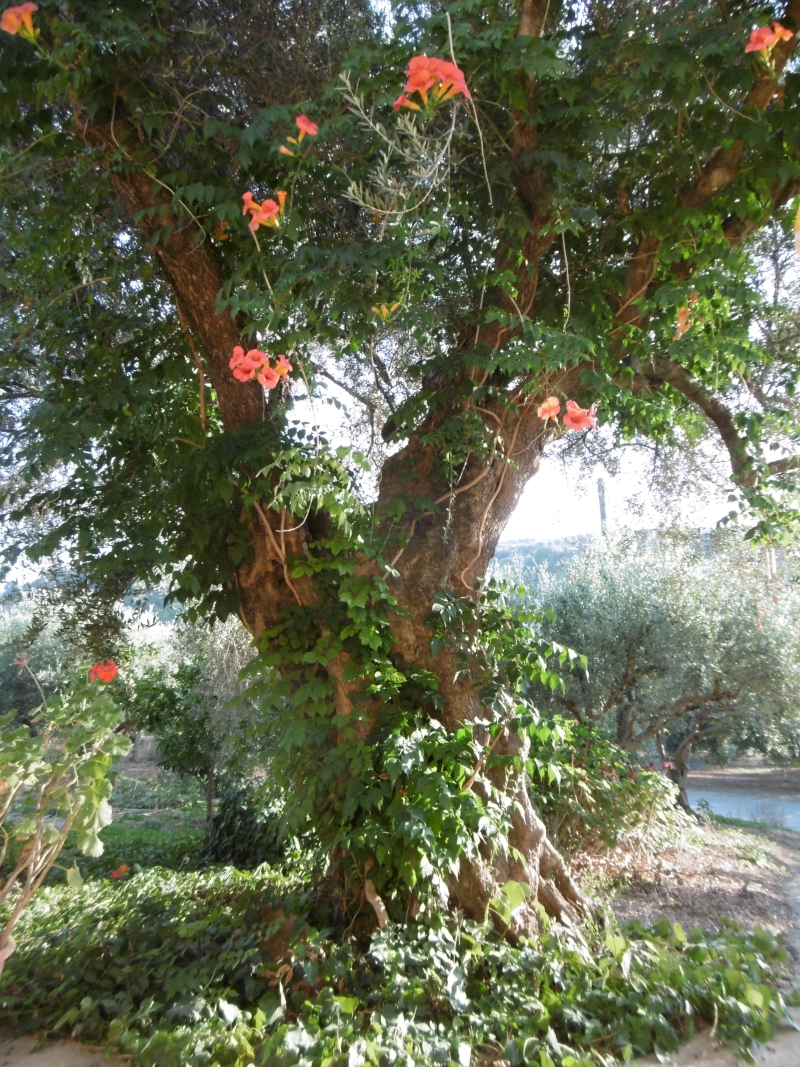 In front of The Old Olive Mill, an 800-year old olive tree still bears fruit and serves as support for a climbing trumpet vine