In time primordial, before there were such things as music, story, or any art,
Earth and Sky were quiet, for no thought could yet be formed.
High atop Mount Helicon a winged horse touched hooves to ground,
Where sprung from Earth a fountain, jet of water unto Sky.
So from Gaia Mother Earth and Uranus Father Sky,
Were begat Melete and Mneme and Aoide, Muses of practice, memory, and song.

The concept of an inspirational muse was born as early as the eighth century BC. In that period, Hesiod dedicates the poetic Theogony as “a rhapsody in honor of the Muses.”

In his Description of Greece, the second-century AD Greek tourist and geographer Pausanias tells of two generations of Muses. The first consists of three elder Muses, daughters of Gaia and Uranus, born as water nymphs on Mount Helicon.

A second generation, offspring of the god-king Zeus and the memory goddess Mnemosyne, gives us the nine Muses of classical Greek mythology. Pausanias has the sisters comfortably installed in their home at the top of Mount Parnassus, one of Greece’s highest peaks.

Each Muse presides over her own domain:

Relief sculpture of the nine Muses
from a second-century Roman sarcophagus, now at the Louvre

Such was the status quo until the seventeenth century, when artists, inspired by the Muses, began to imagine each their own personal muse:

“In the seventeenth century, muse was extended to the inspiration of each poet (1665, Boileau), often evoked in the feminine…”
—Muse entry from a French language historical dictionary, Dictionnaire historique de la langue française, Alain Rey (translation mine)

Instead of inspiring the multitude, the third generation muse tends to the creative spark within an individual artist. Furthermore, while in previous generations muses were feminine, in modern times a muse’s gender is open to the artist’s interpretation:

“Traditionally, the muses were women, but mine’s a guy; I’m afraid we’ll just have to live with that.” —Stephen King, On Writing

Meanwhile, still in the seventeenth century, students at the University of Paris, La Sorbonne, held regular poetry recitals to test their wit. They chose for their venue the Pré-aux-Clercs, an abandoned stretch of land along the Seine given to the university by Charlemagne and neighbored by the Church of Saint-Germain des Prés.

In addition to love sonnets and heroic epics, bawdy limericks and derisive satire were among favorite forms. These later, fueled by quantities of alcohol and directed at clergy and church ladies, prompted a veritable war between students and churchmen. At least one death was reported in ensuing riots. Eventually, the university sold the land, and the students were encouraged to take their Dead Poets Society elsewhere.

On the outskirts of the city, a mound of rubble, piled up from a nearby stone quarry, became a convenient dumping ground. Once the city walls were pushed beyond the man-made hill, the dumping ceased, and nature reclaimed its rights.

Over time the mound was packed into a smooth hillock. It was covered with high grass and rampant weeds when the student poets moved in. Having learned well their lessons in Greek mythology, they welcomed inspiration to the recital space by naming the hill after the Greek home of Muses. 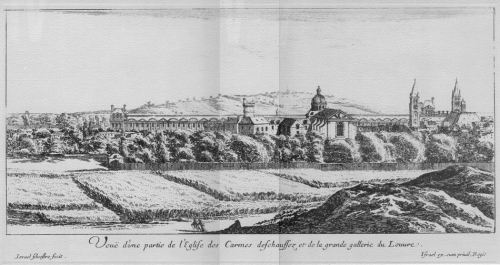 In this seventeenth-century drawing by Israel Silvestre, the butte of Montmartre rises in the background, while the artist does his work on Mont de Parnasse (foreground)

The hill itself is long gone now, flattened to make way for Parisian boulevards. However, the name remains. As the city grew, the neighborhood that sprouted up around the old trash heap became known as Montparnasse.

Most recently, in the 1970s, the city’s only sky scraper was pulled up out of the ground: Tour Montparnasse, new home for muses. 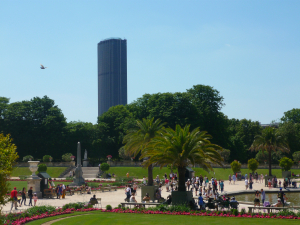 Montparnasse Tower reaches into the sky over the Jardin de Luxembourg

The first part of this article is myth: “a usually traditional story of ostensibly historical events that serves to unfold part of the world view of a people or explain a practice, belief, or natural phenomenon” (Merriam-Webster). In this case, the myth explains the source of human inspiration.

The second part is legend: “a story coming down from the past; especially one popularly regarded as historical although not verifiable” (Merriam-Webster). Though many guide books and historical street atlases make reference to the hell-raising student poets, I've found no primary source to support the story. 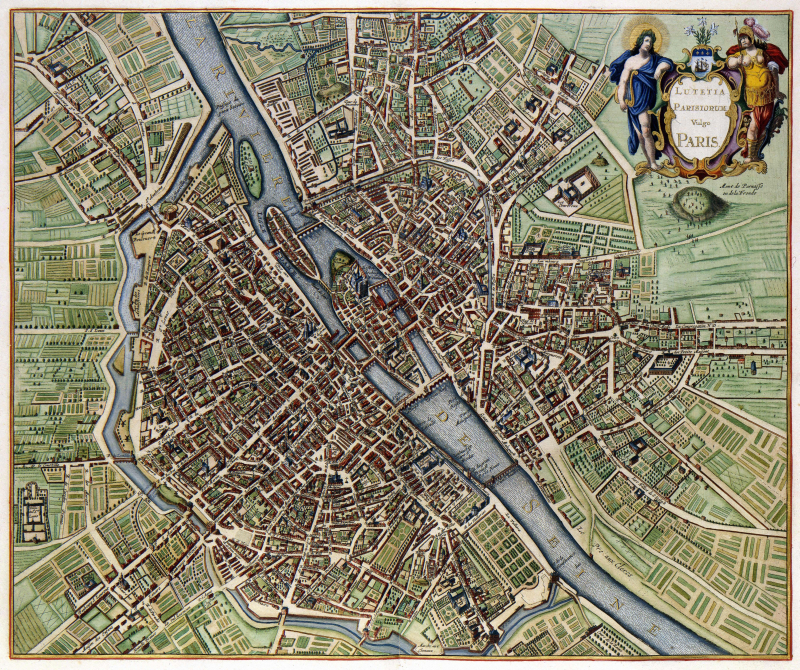 The map is oriented with north to the lower left corner. “Mont de Parnasse” is found in the upper right. The site today is Place Pablo-Picasso in the 6th arrondissement. It’s completely flat.

Posted by Stephen Wendell on Tuesday, October 10, 2017 in Mythos, Paris and Environs | Permalink