From Mont Valérien to Montparnasse 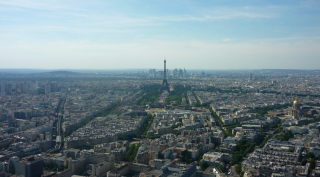 You may have seen this view before: the Eiffel Tower from the top of Tour Montparnasse. Have you noticed the mound below the horizon on the left?

Since antiquity, Mont Valérien was a high place of churches and hermits. Then, in the 19th century, long-range cannon came into wide use. 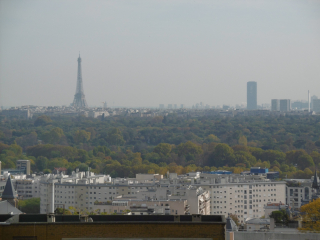 Louis-Phillip, last King of the French, made Mont Valérien a domain of the state in 1830 and built a star-shaped fort atop the hill in the 1840s. It was the only fort of the Parisian defensive belt to hold out against the enemy in the Franco-Prussian War of 1870-71.

Almost 150 years later, the fort remains. Now a modern military installation, it’s open to the public only on la journée de la patrimoine, French heritage day. The rest of the year, the best view is from a park just outside the curtain wall. From there, all of Paris is at your feet, and Tour Montparnasse is 8 km away…

Posted by Stephen Wendell on Saturday, October 21, 2017 in Paris and Environs | Permalink