Peregrine Publishing
Books A Peregrine Reads News The Peregrine Pages About the Author Newsletter
Gruchy-Gréville, Normandy, 1814
Preface to The Way to Vict’ry 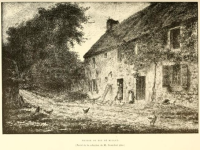 House where Millet was born.
(Pastel from the collection of Mr. Feuardent father.)
Sensier 3

That the young Millet grew up bigger than the other kids his age and strong and curious, that his father was a farmer like his grandfather, that he was the oldest son of eight children and so was obliged to become a farmer as well, that he enjoyed the work and didn’t regret this duty, that he learned Latin and read the Bible and the Confessions of Saint Augustin in that language, that he loved to draw and had a natural talent for it—all this has little bearing on the legend which would be born nearer the end of his life than its beginning. 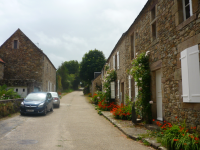 Apart from cars on paved roads and a rooftop antenna, modern day Gruchy appears much the same as in the early nineteenth century

However, within the summary of the painter’s youth are two separate lessons concerning success: How much counts the encouragement of our loved ones, and how narrow is the window of opportunity.

At eighteen, Jean-François talked with his father about his desire to become an artist. His father said:

“My poor François, I see thou art troubled by the idea. I should gladly have sent you to have the trade of painting taught you, which they say is so fine, but you are the oldest boy, and I could not spare you; now that your brothers are older, I do not wish to prevent you from learning that which you are so anxious to know.” (Sensier 40) 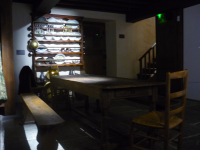 Inside the Millet home now a museum

So with his father’s encouragement, he went to Cherbourg to study painting. But only two months later the father was dying of a sudden illness. The son returned to Gruchy to sit at the deathbed.

Although the short time in Cherbourg had lit the passion within him, after his father’s death, Jean-François succumbed to his sense of family duty and stayed to run the farm. It was only by his grandmother’s insistence that he returned to his destiny:

“My François, you must accept the will of God; your father, my Jean-Louis, said you should be a painter; obey him, and go back to Cherbourg.” (Sensier 42)

How much counts the encouragement of loved ones toward our success! How narrow the window of opportunity!

This is the latest episode in A Pilgrimage to Barbizon. Follow this link to catch up on previous episodes (listed in chronological order). On Wednesday we’ll follow the fledgling painter to Cherbourg. The House by the Well at Gruchy,
painting by Jean-François Millet, 1864