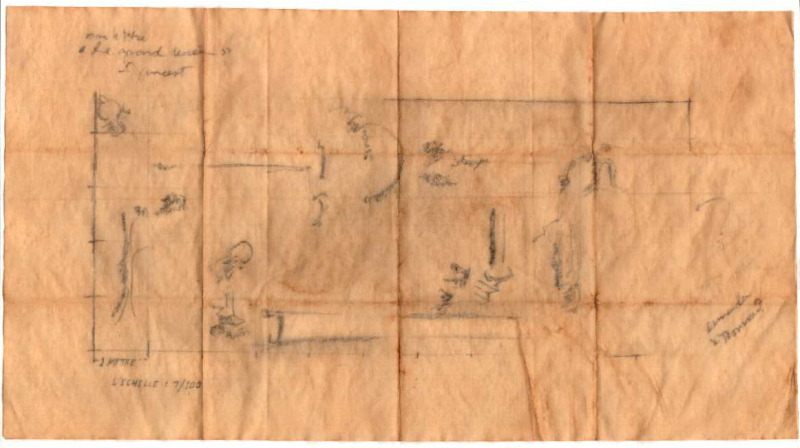 “Drawings done with the intention of later expanding them into full-sized frescoes were called cartoons; Artimus believed that the fragile, discolored sheet which he held in his hands was just such a document. More, he believed that the Rousseau and Vincent alluded to in the scribblings on the reverse side of the vellum were in fact the landscape artist Theodore Rousseau, and the mad master Expressionist, Vincent van Gogh. The cartoon itself, he believed, had been drawn by a contemporary of Rousseau’s, Jean-François Millet, and consequently became known, if somewhat inaccurately, as The Millet Fresco.”

The image above is a scan of my own rendition of the fresco sketch, or cartoon, from the description in the Prologue of The Barbizon Diaries.

The cartoon’s scale shows a fresco 15 feet high by 36 feet wide. I wanted to impress the size and proportion on my mind so, were I to pass by it, I might recognize a surface that could take a painting so large. A quick outline on graph paper was enough. But I couldn’t pass up the opportunity to recreate an artifact.

I didn’t have any charcoal handy. Instead, I used a blunt 9B graphite pencil with indiscriminate smudges. I imagined only hints of a scene that Millet and company might have come up with. The vellum I aged the old-fashioned way: with coffee. Some campaigners soak their ancient maps and documents in black tea to get the look of antiquity. I prefer the richer tones of arabica.

Owen, James A., The Barbizon Diaries: A Meditation on Will, Purpose, and the Value Of Stories (The Meditations Book 2). Coppervale Press, 2016.

Posted by Stephen Wendell on Monday, September 19, 2016 in Barbizon, Paris and Environs | Permalink

The car rental manager in Rethymno, Crete: “What’s the problem?”

“A slow leak in the left rear tire,” I said. “I have to put air in it every morning.”

A thick layer of dust covered the car. He gave it the once over, hands on hips.

“Where have you been?”

In light of the present problem, I didn’t want to admit that I’d driven the compact to the furthest reach of a gravelly, pot-holed two-track at the end of Rodopos Peninsula.

“I’ve been all over your wonderful island.”

That was at least the truth. Although I hadn’t done it all during this latest trip.

He nodded at the rear window, opaque with dust. “Do you see anything?”

“I never look back!” 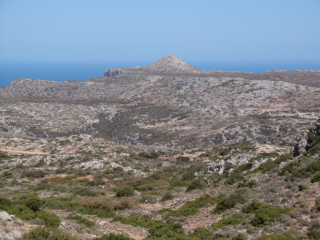 “[Millet] is a laborer who loves his field — plows, sows, and reaps it. His field is art. His inspiration is life, is nature — which he loved with all his strength.”

Barbizon is only a half-hour drive south of base camp. However, I’d like to get a better idea about the artist who allegedly made the fresco sketch. Some research reveals the waypoints along the journey to Barbizon.

Jean-François Millet was a native of Gruchy, a hamlet of Gréville in Normandy. He lived and worked on the family farm to adulthood. The pastoral scenes of his youth would later serve as inspiration for his most famous paintings.

Encouraged by his father at age 20, Millet left home to study painting in neighboring Cherbourg. An art museum had just opened in that town. Millet often went there to copy the works of the master painters as part of his studies. Today, the Thomas Henry Museum holds the third largest collection of Millet paintings.

During three years at Cherbourg, Millet made such an impression on the community that they gave him a stipend to study in Paris. At L’école de Baux Arts (school of fine arts), Millet studied under Paul Delarouche. Later, he also had his own studio in the city. I’ll try to find it. 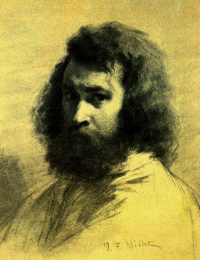 Whether it was the third French revolution of 1848, an outbreak of cholera in the city, the general urban atmosphere or a combination there of, in 1849 Millet took his family to a village of woodcutters on the edge of the Forest of Fontainebleau. By the end of the century it would be known as “the village of painters.”

At his home studio in Barbizon, he painted The Angelus. A few doors down the main street is the inn where the meeting of would-be frescoists supposedly took place, the Auberge Siron (today called the Hôtel de Bas-Bréau).

Millet lived there for the last 26 years of his life. He is buried in the local cemetery of Chailly-en-Bière.

Posted by Stephen Wendell on Monday, September 12, 2016 in Barbizon, Paris and Environs | Permalink 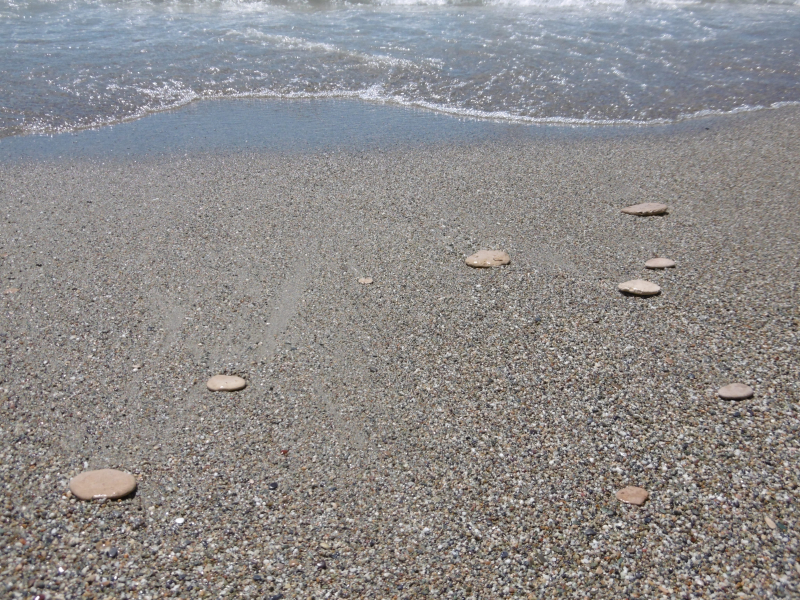 Young Gordy spends mornings combing the beach for flat stones. He spends afternoons skipping them across low rolling waves into the sea, then diving to retrieve them again.

If, during his lunch, the wind blows too strong and kicks up the surf, Gordy buries the flat stones in the dune to find them the next day. The Legend of The Millet Fresco

“You don’t mean the Jean-François Millet who painted The Angelus?” she said.

I was trying to tell Catherine a fantastic story about an artist I had just read in a book and was making a mess of it. There were many details and I had the order of their presentation all wrong. I showed her the book cover. 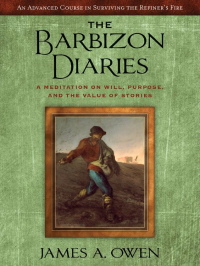 Cover of The Barbizon Diaries by James A. Owen, showing Millet's Sower

“The Sower was one of his paintings,” I said. “He had a studio in Barbizon.”

“That’s him. Millet is one of the great French landscape painters and L’angélus,” she used the French name, “is his most famous painting. You say your friend, James, is related to him?”

From the second and third books of James A. Owen’s Meditations Trilogy, the story of The Millet Fresco is really more of a legend. According to the author’s own admission, it is rumor and hearsay from across the ocean and passed down through the generations on his mother’s side of the family. It's intriguing, nonetheless.

In an effort to get it more or less correct, I’ll summarize the story, first, then I’ll add some details.

A group of painters met at an inn in rural France where they decided to make a fresco. The project apparently never got past the planning stage. However, a journalist present at the meeting took some notes that described the meeting and the sketch one of the artists made of the planned fresco. The notes eventually came into the hands of a distant American cousin of the sketch-making artist. This cousin, a painter himself, was hooked on the idea of painting the fresco and so spent the rest of his life searching for the sketch described in the journalist’s notes. He never found it.

A mundane story, perhaps, but now the details.

According to Owen, the meeting of the painters took place following dinner one evening at an inn located in the French village of Barbizon. The date is unknown, though it may have been sometime during the 1870’s. Among the group was Vincent van Gogh and other now famous artists such as Gauguin, Cézanne and Seurat, in addition to Jean-François Millet. It was Millet who supposedly made the sketch of the planned fresco in collaboration with the others.

Robert Louis Stevenson was the note-taking journalist, and Millet’s distant American cousin who eventually got hold of Stevenson’s notes of the evening was named Francis Davis Millet. Finally, Stevenson’s notes came to F.D. Millet by way of none other than Mark Twain.

From mundane to extraordinary, and it gets better. 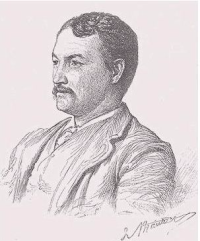 Though probably the least well-known of the names above, Francis Davis Millet is a notable character in his own right. In addition to painter, we can also count sculptor, architect, journalist and war correspondent among the man’s many talents. He traveled as far as Russia and the South Pacific, ostensibly on journalistic business, though possibly in search of the fresco sketch. In 1912 on a trip from Europe to New York, Millet booked passage on the maiden voyage of the largest ocean cruise liner ever put to sea at that time, the Titanic. He did not survive its sinking in the North Atlantic, nor presumably did Stevenson’s notes.

Again, Owen admits that the story is a family legend. There is no hard evidence of any truth to it whatsoever. Explorers know, however, that a legend often has a kernel of truth hidden inside it, like the grain of sand at the center of a pearl. During my journey to Barbizon, I will certainly keep an eye out for it.

Despite my focus here on the legend of The Millet Fresco, James A. Owen’s Meditations Trilogy is about finding and pursuing your purpose in life. The hardcover books, Drawing out the Dragons, The Barbizon Diaries and The Grand Design, are soon to be available by Coppervale Press in a slipcase set. 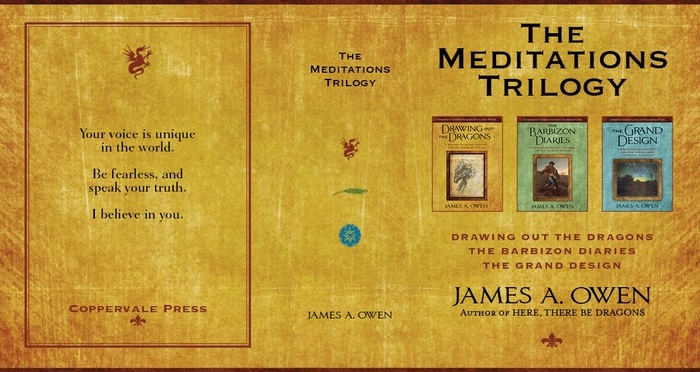 Posted by Stephen Wendell on Monday, September 05, 2016 in Barbizon, Paris and Environs | Permalink