Beat Generation at the Centre Pompidou 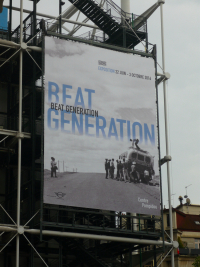 This poster caught my eye the other day in the street. Before the hippies of the 1960s, there were the Beats of the ‘50s. In the later half of that decade, three works emerged to become the Beat manifesto: Allen Ginsberg’s Howl (1956), Naked Lunch by William Burroughs (1959) and On the Road, Jack Kerouac (1957).

I read the story of Kerouac’s great American road trip as a young man, when we should read such stories. When there’s so little of our own road behind us and so much of it stretched out before us in wide, wavy, criss-crossing lines. When we can go anywhere, do anything and meet anybody. When we have no clue what it is we want to do, so we just go to where our feet take us and we meet people and find out where they’ve been and what they’ve been doing. Like that, we make our way until one day we finally discover what it is we want to do, what we’ve always wanted to do. Deep down, we knew it all along. But it takes the journey to wear away the layers of our soul, to expose our true self and show us just who it is we’ve been traveling with all our lives.

So I hopped aboard a passing train and went to see the exposition.

“I first met Neal not long after my father died. I had just gotten over a
serious illness that I won't bother to talk about except that it really had some-
thing to do with my father's death and my awful feeling that everything was
dead. With the coming of Neal there really began for me that part of my life
that you could call my life on the road.”

— excerpt from the manuscript of Jack Kerouac’s On the Road

On the Road (Viking Press, 1957) follows Sal Paradise and Dean Moriarty on their mad, wild journeys back and forth across postwar America. It’s a mostly autobiographical account of Kerouac’s encounters with his overexcited friend, Neal Cassady. They hitch-hike, they jump rail cars, they sleep nights under tarps or in seedy motels and sometimes at the homes of friends or acquaintances. They stay in one place just long enough to make a little cash, working odd jobs, for the next leg of their adventure. And all along the way, they sleep with girls, smoke tea and live life as fast as it will go.

I didn’t think about what I might see at the show. I had heard the legend about Jack Kerouac bashing out his novel on a manual typewriter and one long scroll of tracing paper in a delirious stream of consciousness. But I had no idea the relic might yet exist and even be seen by mortal eyes. 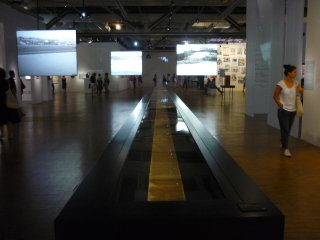 So coming through the turnstile, I was surprised by the long narrow box table stretching to the far end of the gallery. It hit me in an instant and I let out a “Wow!”

As one does with books that grab you from the start, I had memorized its opening lines a long time ago. Reading now from the top of the scroll (excerpt above) and comparing the text to my hazy memory, two things stood out. One is that in his draft the author still uses the real name of Neal Cassady, the real-life person who becomes Dean Moriarty in the book. The other is the cause of the serious illness. In the published version, it isn’t his father’s death but “after my wife and I split up” that his serious illness has something to do with. I remember thinking when I first read the book that “feeling that everything was dead” was unusually drastic for a break-up. I learned from the display tag on the box table that the scroll is, in fact, the second draft of the novel and, perusing the 120-foot length of the thing, I noticed that it’s actually eight shorter scrolls, taped together. Some sections have pencil notes written at the bottom. Of which I could make out not a single word. 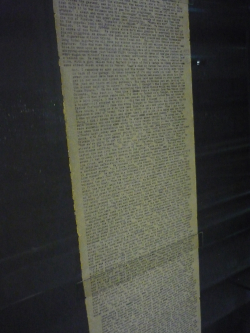 Excerpt from the introductory text to the exposition (photo right):

"Rejecting consumerism, social conventions, racism and homophobia; defending a libertarian ethic and resolutely pacifist but emancipated from any doctrinal commitment; nurturing a profound attachment for big open spaces and shamanic spirituality through which man becomes an integral part of the Cosmos, the Beat Generation inspired not only the hippy way of life and the psychedelic culture, but also opposition to the Vietnam war, support for civil rights movements, and the revolts of young people during the Sixties in Berkeley, Flint, Columbia, Chicago and Watts."

Couldn't we have another go at this? 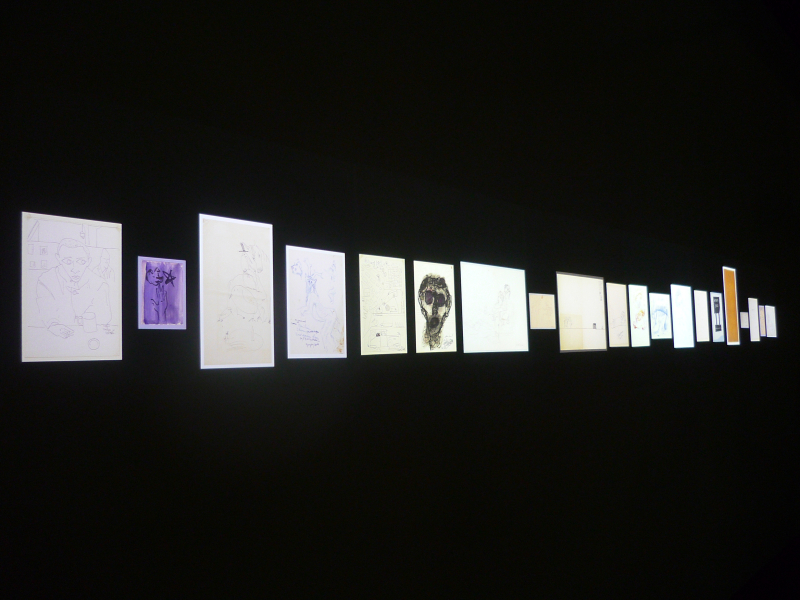 What stuck me as I wandered through the sizable exposition: The Beats weren’t just writers and poets. They were also photographers and film-makers, sculptors and musicians. They made drawings, illustrations, collages and paintings. Mixing together these media, they created a wonderfully diverse body of work.

Kerouac wrote the scroll draft in April 1951, but he began writing the first draft of the novel as early as 1948. Several revisions and several rejections from publishers later, On the Road was finally published in 1957. It was his second novel. 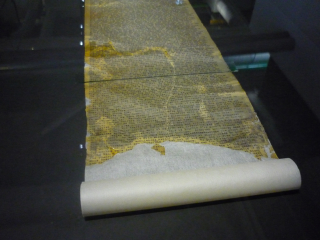 The end of the scroll has worn away. I could make out the words, “…ambulances merely come through at…,” which corresponds to text on page 301 in my copy of the book, nine pages from the end.

Safe under glass in the box table, Kerouac’s scroll seems out of context. I imagine dim yellow light on the peeling wallpaper of a New York apartment; a whiskey glass on the table, cigarette smoke hanging thick in the humid evening air as the author in sleeveless t-shirt bangs away on a noisy machine. Clack, clack, clack. The end of the novel and the author’s success are far off.

And between here and there... the road.

Beat Generation through October 3 at the Centre Pompidou, Paris.

Posted by Stephen Wendell on Friday, August 05, 2016 in Authors & Other Artists, Paris and Environs | Permalink