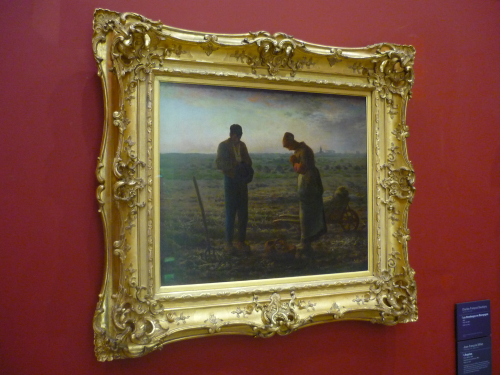 The church bell tolls the hour across a somber field
Under summer evening’s hazy, slanted light.
The day’s potato harvest at their feet between,
A woman and a man in pra’er devotion stand.
Their daily tools of toil aside them idly lain
And crying birds in flight above on higher plane.

Signaled three times daily in previous centuries by the local church bell, the Angelus is a prayer devotion in the Catholic faith. Its name refers to the angel Gabriel who brought rather astonishing news to Mary (Luke 1:26-38).

In 1859, French painter Jean-François Millet captured the solemn moment in one of his most famous paintings named after the prayer.

I remember learning about the prayer and the painting in Art History class. Nineteenth century Europe was a different time, a different place and both so far away from Newberry, South Carolina, in the early 1990s that it cried, like the birds in flight above, straight over my head.

Having been recently reminded of these things, I did some research and discovered that L’angélus, the painting, currently resides at the Musée d’Orsay in Paris. No more so far away.

Furthermore, I learned that the painter himself lived and worked in a village a half-hour drive south of here. And so begins my pilgrimage to Barbizon.

Photograph of L'angélus by Jean-François Millet at the Musée d'Orsay, Paris

Posted by Stephen Wendell on Friday, July 29, 2016 in Barbizon, Paris and Environs | Permalink