We passed the peasant wobbling along the forest lane with his cart. When he saw me, he raised a hand in greeting and started to speak. Then he saw Gwenevere's tears, and he stopped wobbling.

I put Gwenevere on the donkey. She had to sit sideways because she was wearing a dress. I took the lance from under Lancelot's arm and stuck it back in its boot on the side of the saddle.

Rain spattered the mud at Malegant's feet. He gritted his teeth and went back inside the tower. Raindrops and tears ran down Gwenevere's cheeks, as she and I rode across the Meadows of Gorre.

I was taking her back to King Arthur's court. The king would be happy to see her, and he would host a feast in her honor. A feast is a party where everyone is invited. There's a lot of food to eat and there's a lot of dancing. But I didn't feel like eating and dancing.

We crossed the Brigand's Bridge. The brigand stood beside the bridge, whittling a stick with his knife. Pushing the blade away from himself, he shaved off strips of wood. He saw Gwenevere crying with his unpatched eye. Then he looked at me, and I looked away.

“C'mon, Tilt.” I urged the horse across the bridge. 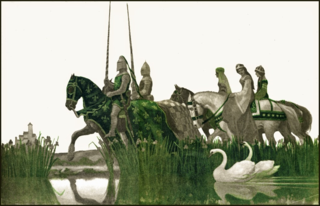 We passed the peasant wobbling along the forest lane with his cart. When he saw me, he raised a hand in greeting and started to speak. Then he saw Gwenevere's tears, and he stopped wobbling.

With a finger, I leaned the Weeble into a bow as Gwenevere passed on the donkey.

Then, from behind me, I heard my little sister's voice. “What's happening?”

My little sister looked up at me. She wrinkled her forehead and pouted her lips.

“Okay, then.” She walked passed me, looking at the action figures arrayed on the floor. “Can I play now?”

She grabbed Gwenevere from the donkey.

“I'm going to put her blue dress on.” She ran toward her room. “And I'll bring my tea set!” she called out from down the hall.

I looked at Granddad. He was smiling at me.

“Did you solve your dilemma?”

“I did what I thought was best, Granddad. Gwenevere cried when I broke her heart, but I think she's getting over it.”

My little sister came back, her arms loaded with plastic tea cups and saucers and a tea pot. In one hand, she gripped her Barbie doll, who was wearing a blue dress now. She let the cups and saucers fall to the floor.

“We need a table to put the cups on,” she said.

I took the picture book off the Brigand's Bridge, and I pushed the two stacks of books together into a square.

“Let's make believe this is the Round Table,” I said.

She picked up the Weeble. “Who's this?”

“That's the peasant I told you about. And the wooden block is his cart.”

“He can come to our party.” She put the peasant and his cart next to the Round Table. On either side of the peasant, she put the brigand and Malegant. “And these guys can come, too, if they're good.”

I leaned the picture book against the legs of the table that used to be the Gauntlet Tower. King Arthur sat on his throne, looking over the scene from the front cover. I moved Grandma's music box next to him.

“Gwenevere can sit here,” I said. “That's the queen's throne.”

“She's going to dance at the party,” said my little sister. She held the Barbie's legs in one hand and touched her toes to the floor, while she turned the torso from side to side with her other hand. “See how she twirls?”

Outside, the rain had stopped. I saw sunshine on the leaves of the trees. Birds flitted between the branches.

I took Lancelot from his horse—

“Your horsey can come to the party.” She reached out for Tilt and I handed the horse to her. “And the little one, too,” she said, sweeping up the donkey in her other hand. She arranged them both around the table with the other action figures.

I removed the shield from Lancelot's arm. “Put Lancelot's shield at his place at the Round Table.”

She took the shield and leaned it against the stacked books. “He can sit here next to his horsey.”

“Leave room for the other knights, too,” I said. “All the knights of the Round Table are coming.”

I rubbed Lancelot's armor on my shirt to make sure it was shiny. Then I stood him up in front of King Arthur. I bent him forward at the waist so it looked like he was bowing to the king.

“Lancelot,” said King Arthur, “most faithful of all the knights of the Round Table.”

Granddad had been watching me and my little sister play. He got up from his desk and brought his fountain pen. He sat down in his favorite chair beside the table that used to be the Gauntlet Tower.

I rose from my bow and took a step toward the king.

Granddad sat with his elbows on his knees. He held the fountain pen in one hand. “Come here,” he said.

Granddad only ever said “Come here” when he had something important to tell me, so I did.

With the fountain pen, Granddad touched my right shoulder then my left. “Most chivalrous of all the knights of the Round Table,” he said, “I dub you Littlelot.”

When the king makes someone a knight, he touches a sword to their shoulders and gives him his knight's name. It's called a “dubbing.” Granddad didn't have a sword, so he used a fountain pen, instead.

“Now, Littlelot, why don't you play some music?” He was looking at Grandma's music box.

I opened the music box. Inside, a tiny figurine of a woman held a violin and a bow. I heard a click and a whirring sound, and one of the woman's arms raised the violin to her chin. Then the other arm set the bow to the strings and music began to play. The tiny woman was like an action figure except she could only move her arms, and an action figure doesn't usually play music.

Granddad stared at the music box while he listened to the music. Grandma must have been next to him, listening to the music, too.

“What's the name of Grandma's favorite song?” I said.

Lancelot and Gwenevere danced to the music. Gwenevere's crown hung in her hair, and the blue dress twirled about her waist. Malegant and the brigand talked in low voices. The peasant wobbled around the table with his cart, talking to the other knights, while Tilt slurped tea from a cup, and the donkey brayed.

“You can open the music box and listen to it whenever you want.”

He nodded and smiled, and I hugged him.

My little sister was bouncing and whirling around the room to the lively rhythm of the music. She held Lancelot and Gwenevere in her hands stretched out in front of her. I reached out my arm as she went by and she hooked my arm in hers, and we bounced and whirled around the room together. Granddad laughed, then my little sister and I started laughing, too. We laughed and bounced and whirled until finally the music wound down, and we collapsed from exhaustion.

Sometimes, I go into Granddad's study. The music box sits on his desk next to the picture of Grandma, and there's a picture of Granddad, too. I open the box and I watch the tiny woman figurine raise the violin to her chin and put the bow to the strings. When I hear Grandma's favorite song, Grandma and Granddad are there, listening to the music with me.

The music reminds me of the day Granddad and I played make-believe with my action figures on the floor of his study. It reminds me of Granddad, writing in his memoir. And it makes me want to go to a lot of places and do a lot of things and meet a lot of people, just like Granddad did.

Now, when people ask me what my name is, I always say, “My name is Littlelot,” because that's the knight's name that Granddad gave me.

This final episode of the first story of Littlelot is dedicated to the memory of all my grandparents and great-grandparents. I have pictures of all of them. And memories. All those floors, all those games.... 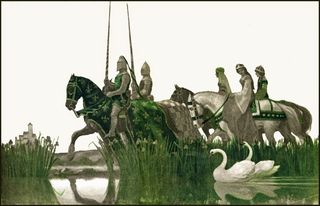