Malegant and I faced each other across the field, two mounted knights in armor and shield, lances at the ready. Gwenevere waved the red banner from the window at the top of the tower. The wind blew heavy clouds across a dark sky...

Outside the rain had stopped, but I could tell it hadn't stopped for long. Black clouds hid the sun, and the wind was still blowing.

As I approached the Gauntlet Tower, I saw Gwenevere at a window near its top.

“Gwenevere, my queen! I've been looking for you.”

“Lancelot, fairest of all the knights of the Round Table,” said Gwenevere. “I've been captured by Malegant, and he locked me in his tower.”

Malegant is a villain in the picture book. He captures the queen and makes her his prisoner, and he helps Mordred to usurp Arthur's throne, which means that they try to take the throne away from the king.

“Who's there?” said Malegant from inside the tower.

“I am Lancelot, a knight of the Round Table. Release Queen Gwenevere, or I'll have to fight you.”

A joust is a fight between two knights on horseback. They charge at each other with their shields and lances. Each knight uses his lance to knock the other knight off his horse, and he uses his shield to keep the other one from knocking him off his own horse. The knight who stays on his horse is the winner, and he gets to name his prize.

“If I win the joust, you release Queen Gwenevere.”

“And if I win,” Malegant said, “I take you prisoner as well.”

I went back to my room to find a figure for Malegant. I had a villain action figure, but it wasn't a knight. It was a cattle rustler. A cattle rustler is like a cowboy except he's a bad guy. He had a scar on his cheek and a scruffy beard. His eyes were squinted, and he gritted his teeth. I didn't have another horse, so I used a donkey that my mom borrowed from me every year at Christmas time to stand beside the manger.

The cattle rustler wore a sheepskin vest, and he came with a rifle. I put the rifle in his hand to use as a lance, and I made-believe that the sheepskin vest would keep him from getting hurt, like Lancelot's armor.

He still needed a shield for the joust. The only thing I could find in my toy box that looked like a shield was a blue wooden triangle. I took the cattle rustler, the donkey and the wooden triangle back to Granddad's study.

“I need to make the shield stay on his arm, Granddad.”

I held up the cattle rustler and the blue wooden triangle. Granddad opened the drawer of his desk and took a rubber band from it. He held the triangle to the figure's left arm and wrapped the rubber band around it twice, making a cross in the front of the triangle.

He handed me the action figure. “How's that?”

The cattle rustler squinted his eyes at me over the blue shield. 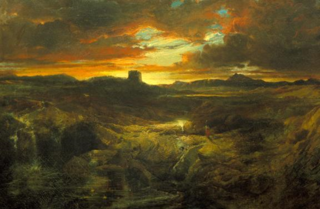 Granddad watched as I set up the two knights on the floor in front of the table. I took the lance out of its saddle boot and put it under Lancelot's arm for the joust. I untied the red banner from the pointed end of the lance and put it in Gwenevere's hand.

Malegant and I faced each other across the field, two mounted knights in armor and shield, lances at the ready. Gwenevere waved the red banner from the window at the top of the tower. The wind blew heavy clouds across a dark sky. Tilt stomped the stony ground. Malegant gritted his teeth at me, and his mount brayed. A tumbleweed rolled between us.

“Malegant, I know you are plotting with Mordred to usurp the throne of King Arthur.”

“And we will succeed. But not before you will break your oath to the king.”

I raised the point of my lance high as a sign that I was ready. Malegant did the same with his lance. In the tower window, Gwenevere held up the red banner, then drew it down in a swift motion. I set my heals into Tilt's flanks, and he leaped forward into a gallop.

In memory of my Nana and Bill, her second husband. Bill was an engineer. He taught me how to make my own graph paper from blank sheets, which I used to make an enormous map of an evil wizard's castle and its grounds. Two dozen letter-sized pages covered Nana's living room floor, from the television set to the coffee table, from the front window to her recliner, for an entire week during the summer of 1982. Painting by Thomas Moran 1859. Inspired by a poem of the same name by Robert
Browning.