It was a rainy day in May, so I had to play inside. Granddad and I were playing make-believe with my action figures on the floor of Granddad's study.... I liked to play make-believe with Granddad. He let me make believe whatever I wanted, and he talked for other people in the game, like the peasant who said he owed me a favor for helping him.

Tilt was the name of my horse, and we were pulling a cart out of a ditch for a peasant because he needed help. I had sworn an oath to the king that I would always follow the code of Chivalry, which meant I had to be loyal to the king and to protect his realm, and I had to help people when they needed it.

“I am indebted to you for this assistance,” said the peasant. “What's your name?”

“My name is Lancelot. I am a knight of the Round Table in King Arthur's court.”

“My profound gratitude to you, Sir Lancelot.”

It was a rainy day in May, so I had to play inside. Granddad and I were playing make-believe with my action figures on the floor of Granddad's study. Action figures are like dolls, except they don't look like babies. They look like grown-ups. They have arms and legs that move, and their heads turn from side to side. You can stand them up on their feet and put them in different poses, just like real people. They come with their own clothes, but you can't change them like you can with dolls and their clothes.

I liked to play make-believe with Granddad. He let me make-believe whatever I wanted, and he talked for other people in the game, like the peasant who said he owed me a favor for helping him.

“Can you tell me, kind sir,” I said to the peasant, “what is the way to the Gauntlet Tower?”

The peasant wasn't a knight, of course, but according to the code of Chivalry, I had to be courteous with everyone, and I only knew how to be courteous in the way my mom had taught me. That's why I called him sir. I didn't have an action figure that looked like a peasant, so I used a Weeble, and his cart was a wooden block.

Granddad couldn't play with me on the floor, because his knees were too old. He sat at his desk, writing in his book. He called it his “memoir,” which is a book about everything he had done in his life. Granddad had already lived a long time. He had been to a lot of places and done a lot of things and met a lot of people. “I'm writing down what I've learned,” he said, “so you can read it when you're grown up.”

Granddad looked at me over the spectacles he wore whenever he wrote in his book.

“The Gauntlet Tower is down the forest lane,” said the peasant. I made him wobble while he spoke. “Cross the Brigand's Bridge and go on to the Meadows of Gorre. There, you'll find that evil fortress.”

Granddad and I had read together a picture book that my parents had given me for my sixth birthday. It was called King Arthur and the Knights of the Round Table, which is a story about a king and the adventures of his knights. The front cover of the book had a picture of King Arthur sitting on his throne, and on the back cover there was a picture of a funeral barge on a misty lake. King Arthur dies at the end, because he gets in a fight with a knight named Mordred. 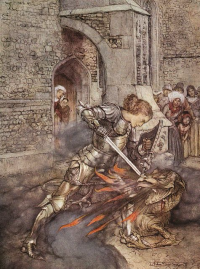 How Sir Lancelot fought with a friendly dragon

Of all the knights of the Round Table, Lancelot was my favorite. Lancelot's figure was taller than most of the other action figures in my collection. His clothes were hidden under a suit of shiny armor, and he had a sword and a shield that I could put on him if he had to fight someone. He carried the sword on his belt and the shield on one arm. He had a lance, too, that he could use for jousting. A red banner was tied to the pointed end. When Lancelot wasn't using it, the lance stuck up out of a boot on one side of the horse's saddle with the pointed end and its banner in the air.

Then I waved good-bye to the Weeble and his wooden block. I turned Tilt down the forest lane and rode away.

Tilt was a gray horse with white speckles and a dark gray mane. Tilt's legs didn't move like the legs of my people action figures. He was always standing still. I dropped a book on him by accident one day and smashed the two legs on the left side. My dad helped me glue the legs back on, but after that, they were shorter than the legs on the right side. He still stood on his own but he was tilted to the left, so I called him Tilt. When I put Lancelot on his back, I had to tilt him to the right, or they would both fall over.

After a while I came to the bridge. A man was standing on it. I borrowed some books from Granddad's shelves and made two small stacks a short distance apart. I laid the picture book across them to make the bridge.

Then I ran to my room to look for a brigand in my toy box. I found a G.I. Joe action figure that came with an eye patch for when Joe was wounded and a knife for when he had to fight someone. I put the eye patch over his left eye, stuck the knife in his hand and brought him back to Granddad's study. I stood the figure on the picture book.

“Hail there!” I said to the man on the bridge. “Stand aside. I am on a mission for the king and I must cross the bridge.”

The man on the bridge looked at me with his unpatched eye and said, “This is my bridge. All those who would cross must pay the toll.”

“The bridge lies within the realm of King Arthur. Therefore, it belongs to the king. I am a knight of the Round Table, and you, sir, are a brigand. Stand aside, or I'll have to fight you!”

“I will stand aside after you have paid my toll.”

It didn't seem right that the king's subjects should have to pay a brigand before crossing the bridge, so I had to fight him.

I removed Lancelot from the back of the horse. I took the sword from its place on Lancelot's belt and put it in his hand. I took the shield off his arm, because the G.I. Joe figure didn't have a shield, and in the picture book Lancelot always fights fairly.

I stood him up in front of the G.I. Joe figure, and they fought a battle on the bridge. Lancelot won, of course, because he's the best fighter of all the knights of the Round Table. He could have won the battle with a hand tied behind his back, but the arms of the action figure wouldn't go behind its back, so he fought with both hands. He could only use one hand to hold his sword anyway, so I guessed it didn't matter much.

After the battle, I put Lancelot's sword back on his belt and the shield on his arm. I set Lancelot on the horse, tilting him to the right so they wouldn't both fall over. Then I crossed the Brigand's Bridge and rode on to the Meadows of Gorre.

My profound gratitude to Catherine, my wife and my first reader. She lets me make believe whatever I want, and she reads episodes of Littlelot over and over until I get it right.

How Sir Lancelot fought with a friendly dragon

Illustration by Arthur Rackham. From "The Romance of King Arthur and His Knights of the Round Table" by Alfred W. Pollard. Macmillan 1917.