She said I had to be nice to her doll, because one time my big brother ripped Barbie's head off. Dolls and action figures are like that. Their heads turn from side to side, and you can rip them straight off. It's easy to stick them back on again, but ripping their heads off isn't a nice thing to do.

The grass on the Meadows of Gorre was all dead because that's where the villain lived. I rode Tilt across bare dirt and stones.

A sudden flash of lightning and a loud clash of thunder from the storm outside startled me. I jerked my hand away from Tilt with Lancelot on his back, and they both fell over.

Granddad looked through the window at the rain pouring down and the wind whipping the trees.

I stood Tilt back up on his uneven legs.

Even though I had fallen on some stones, I wasn't hurt either because I was wearing armor. Armor keeps me from getting hurt most of the time.

I climbed back on the horse and rode through the storm. The rain poured down on us, and the wind blew Tilt's mane to one side and whipped the banner on the end of my lance. 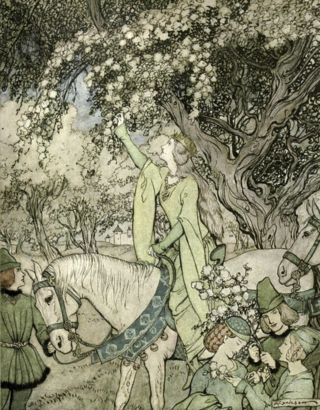 Gwenevere is the queen in my picture book, because she's married to King Arthur. I didn't have any girl action figures, but my little sister had a Barbie.

A Barbie is a doll, but it doesn't look like a baby. It looks like a girl. Her arms and legs move and her head turns from side to side, like an action figure. But you can't stand her up by herself, because her toes are pointed like she's trying to walk on her tiptoes, and you can change her clothes. She came with lots of clothes that my little sister changed all the time and a crown that she liked to put on her.

My little sister was taking a nap, because she's only four years old. My mom said I shouldn't bother her during her nap time. It was a rule I had to follow. I had a lot of rules to follow, and I had to remember them all, too.

The door to my little sister's room was open, so I went in. She was curled up in the covers, sound asleep. I saw her Barbie doll at the foot of the bed. She was wearing a long green dress and her crown.

I could have just taken the Barbie and brought it back to her after my game, but my mom said I should always ask to borrow things that belong to someone else. It was another rule I had to follow.

In this case, though, I couldn't ask to borrow the Barbie, because my little sister was sleeping. And I couldn't wake her up, because it was her nap time. It was a problem that didn't have a good solution. My dad called that a dilemma.

I decided to wake her up, because my little sister would be upset if her Barbie wasn't there when she got up from her nap.

I nudged her arm gently, and she stirred. She opened her eyes half way and looked at me sideways.

I whispered, “Can I borrow your Barbie doll?”

“I want her to be Queen Gwenevere in my game of make-believe.”

My little sister hadn't read the picture book about King Arthur and the adventures of his knights, but in make-believe we make up the story as we go along, anyway, so that didn't matter. The problem was that I already could have gotten in trouble for bothering her during her nap time. If she got up to play make-believe with me, she'd get in trouble, too.

“You can play after your nap time is over. I'll tell you all about what happened and we'll play what happens next.”

“Okay.” She sat up and reached for the Barbie. “But you have to be nice to her.”

She said I had to be nice to her doll, because one time my big brother ripped Barbie's head off. Dolls and action figures are like that. Their heads turn from side to side, and you can rip them straight off. It's easy to stick them back on again, but ripping their heads off isn't a nice thing to do.

She gave me the doll, and I took it to Granddad's study. Granddad raised an eyebrow as I sat the Barbie on the top of the table.

“You didn't bother your sister while she's taking her nap, did you?”

Granddad knew all the rules I had to follow, and he raised his eyebrow when he wanted to remind me of one of them, in case I had forgotten.

I looked at him and grinned. “Not much.”

Granddad turned his head and pointed his raised eyebrow right at me.

“I asked to borrow her doll,” I said, “then she went back to sleep.”

Granddad lowered his eyebrow and grinned back at me. My mom said that me and my dad and Granddad all had the same grin. She said, “No matter who's wearing that grin, there's always mischief behind it.”

This episode is for my own little sister, Paulette, who got the mischievous grin in the family. She showed me how to rip Barbie's head off, and I showed her how to stick it back on again.

Illustration by Arthur Rackham. From "The Romance of King Arthur and His Knights of the Round Table" by Alfred W. Pollard. Macmillan 1917.